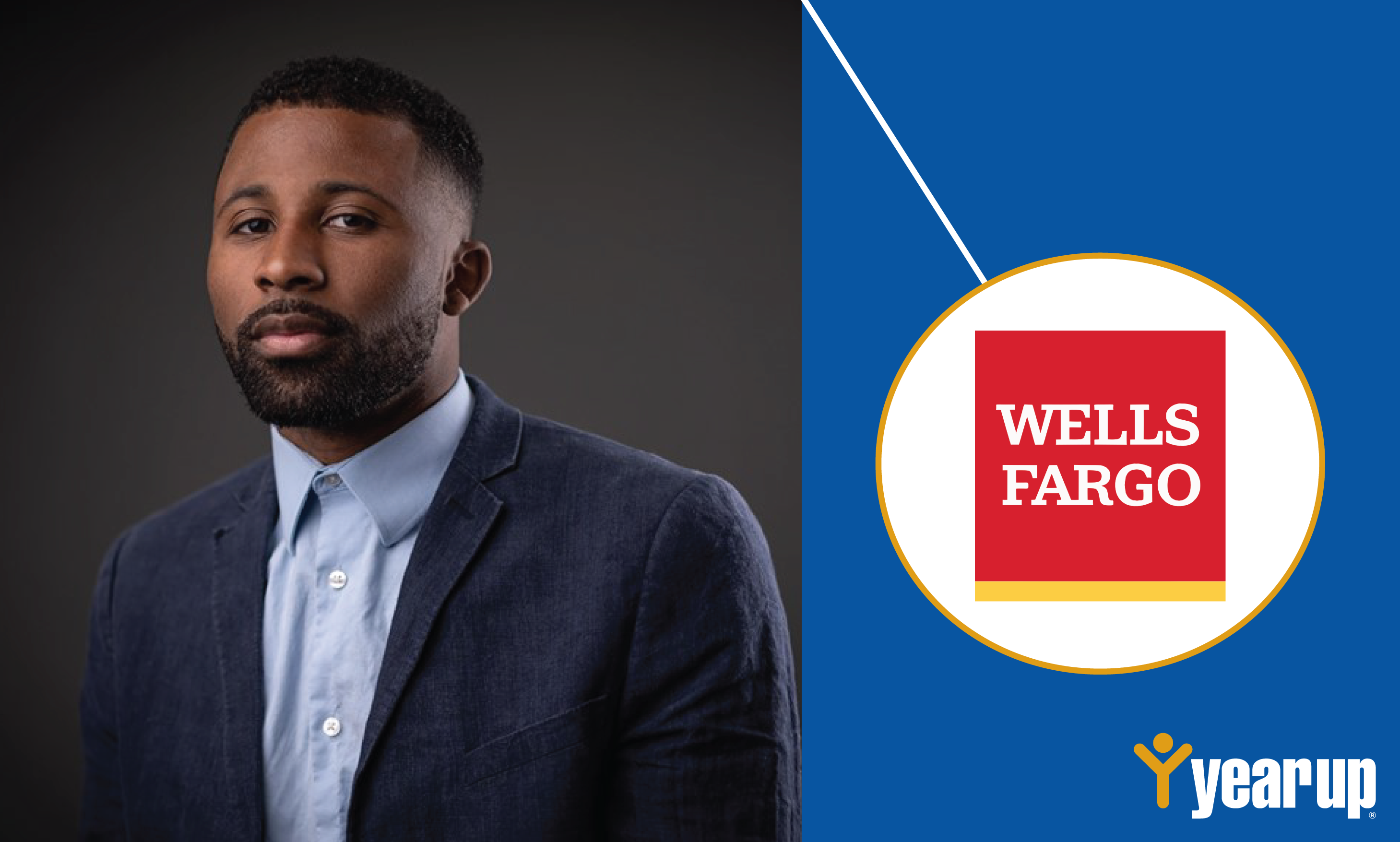 Preparation. It’s a word that’s defined the career arc of Ainsley Morgan, who graduated from Year Up Charlotte’s Career Accelerator pilot program in November 2021. When he was dissatisfied with his job prior to Year Up, he devoted 18 months to reading books and watching videos on computer languages. When he saw a Year Up social media post, he researched how the organization could boost his ambitions. Between meetings and working on deliverables at his Wells Fargo work-based experience, he pored over the company’s technologies.

Thanks to Ainsley’s diligence and thoughtful approach to a career in web development, the door was already cracked open. He just needed a way to get his foot in, and Year Up’s Career Accelerator provided a path to do so. The program compresses Year Up’s traditional 12-month cycle into five months, giving participants a chance to gain vital professional and technical skills and then more quickly start their work-based experience.

“Stay persistent, stay hungry, have faith in the process. You can always change the direction of your life — you just have to put in the effort.”

Today, Ainsley works full-time as an Engineering Associate at Wells Fargo, where he is developing the company’s application for financial advisers to monitor their accounts.

“I had a lot of times of uncertainty before Year Up. I knew I was putting in the time, but I didn’t see how I would get to my end goal,” Ainsley said. “Year Up put me in a position where I could learn and take advantage of my work-based experience.”

With Ainsley’s self-training in web development, his degree in international business from the University of North Carolina Greensboro, and his previous job experience as a loan officer, he was an excellent candidate for the Career Accelerator model. Plus, Ainsley had a family — a wife and two young children — so he had extra financial motivation to swiftly launch his career.

With full support from his wife, Ainsley spent the learning and development phase polishing his skills in public speaking, networking, and general communication. “After going through the program, giving presentations and taking the lead on projects, it gave me the confidence I needed,” he said. He also used the time at Year Up to become a Professional Scrum Master, developing fluency in the Scrum framework, and took advantage of the skills platform Pluralsight to expand his technology horizons.

At his Wells Fargo work-based experience, Ainsley once again turned to research, learning everything he could about the company and his role. He impressed his managers with his initiative, his problem-solving capabilities, and his eagerness to learn. As his Year Up graduation approached, Ainsley decided to put those networking and communications skills to use.

“On my team, there were only senior developers. I asked if my manager if he had any room for junior developers. He said, “You mean you?’” Ainsley said with a laugh. “He said, ‘I’ve been impressed with the work you’re doing.’”

With a boost of confidence, Ainsley applied for a developer position and went through the interview process. When he heard he had been selected for a full-time role, he was ecstatic. Thanks to the support of Year Up corporate partner Wells Fargo and Ainsley’s manager, Jian Yang, Specialty Software Engineering Manager at Wells Fargo, Ainsley secured what he’d been preparing for.

His family was there to celebrate when Ainsley graduated from Year Up and started his new career. His sons Eli, now four years old, and Avielle, who is two, have been able to watch their dad hone his technology skills and pursue his goal of becoming a senior developer. Ainsley also shares what he’s learned with current Year Up participants by speaking on panels, coaching them on internship preparation, and encouraging them to use platforms like Pluralsight to further their knowledge. He often thinks of the advice he would have given himself at the start of his Year Up experience.

Support Year Up innovations that empower more young adults to jumpstart their careers, support their families, and give back to their communities.

The Year Up graduate came from Venezuela with just one bag and now works on United Airlines’ domestic pricing team.
See more