The Power of Vulnerability: Daniel Silva 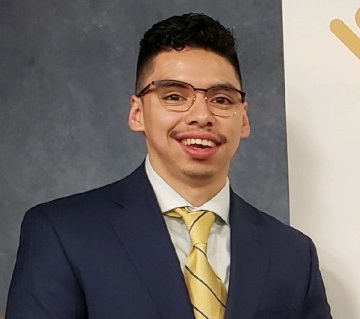 How this Year Up graduate went from barely making ends meet to a Corporate America career.

Daniel Silva went to college right after high school, but he dropped out after his first semester. He just wasn’t ready for college. Over the next few years, responsibilities started to pile on, and he knew he had to make a change.

When he was 23, Daniel decided to return to school at El Centro College. As a bright student, Daniel became a supplemental instructor for two classes. Then, to make ends meet, he also worked the graveyard shift as a gas station manager six days per week. Between his two jobs, Daniel worked almost 60 hours a week while taking college courses to pursue his Associates Degree in the IT field. He struggled to get enough sleep to function and work enough to pay his bills.

While working with Professor Davis at the college, Daniel heard her tell students about the Year Up program. It sounded too good to be true, and he kept looking for the catch — there was no way that the program could be free and that he would receive a weekly stipend for participating. After thinking it over, Daniel decided to apply and joined Year Up Dallas/Fort Worth as part of the Class 2 cohort.

In the beginning, Daniel was independent, headstrong, and had an attitude that there was no need to broaden his horizons. However, he slowly learned that he could trust the process, as well as the supportive staff members and his colleagues, and show his authentic self. His biggest takeaway from the Learning & Development phase was that vulnerability is not a weakness. In fact, being able to admit you need help, that you are tired or scared, is a sign of strength and keen self-awareness. Having the willingness to say he couldn’t do something opened opportunities to learn and grow.

When the internship phase of the program began, Daniel was ecstatic to be matched with JPMorgan Chase & Co. (JPMC) for a consultant position. The first few weeks at JPMC were a culture shock for Daniel. He thought, “How could a guy who works at a gas station fit in with the Corporate America job culture?” But as he became more comfortable, he became more confident. He began to understand the management hierarchy and learned the importance of networking and learning from his colleagues. Year Up taught him to showcase who he was and his potential.

When Daniel graduated from the Year Up program in January 2018, he converted his JPMC internship into a career as a transaction processing specialist on the Commercial Term Lending team. While working, he continued his education and graduated from El Centro College in December 2019 with his Associates Degree in Networking Administration & Support for Security. And, in his last semester, he made El Centro’s President’s Honor Roll. Recently, he moved into his first apartment and purchased a reliable car — a huge first for him!

Looking back on what he thought he knew, Daniel laughs. He can see now how much knowledge he gained through both phases of the program, especially the professional skills. He also learned that the program really isn’t free. Maybe he didn’t have to pay any money, but he paid with his time and dedication to the program. His best advice to future students? Don’t be afraid of change.

Give to Year Up.