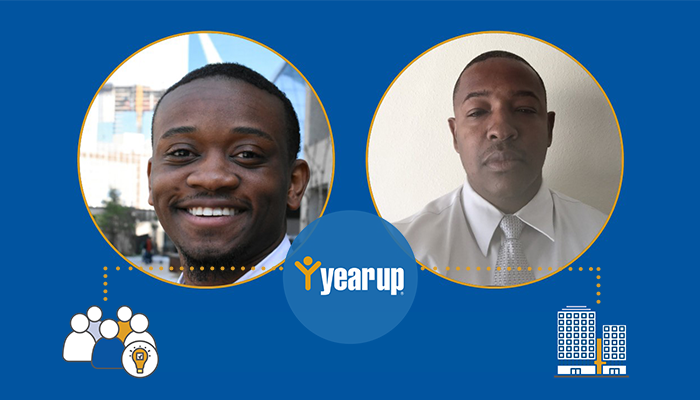 Curiosity, drive, and mentorship from his internship supervisor, Marcus Hall, set Rhyan up for career success.

As an IT Support Associate at Amazon, Rhyan Taylor has thrived because of his ability to go beyond surface-level solutions to network and software challenges. He searches for permanent resolutions instead of temporary fixes.

With help from Year Up, and encouragement from his Amazon internship supervisor, Marcus Hall, Rhyan did the same for his career. The Dallas native graduated from Year Up Dallas/Fort Worth in January 2020, where he specialized in Helpdesk/Desktop Support and learned skills in operating systems, computer networking support, customer service, and computer hardware.

He interned at Amazon as part of the program and developed a strong mentorship with Marcus. That relationship had benefits on both sides: it built Rhyan’s confidence and skills, and it turned Marcus into a passionate Year Up champion at Amazon working to help young adults succeed. Based on Rhyan’s proactive nature, positive attitude, and professional skills he refined with Marcus’ guidance, the tech giant quickly identified Rhyan for conversion and hired him on full-time.

Marcus was one of my first managers to believe in me and push me toward greatness. I saw how assertive he was, and that was the type of manager I needed.

“At Amazon, I get to do something I’ve wanted to do since I was young: work with computers,” Rhyan said. “I’ve gained a career for myself.”

Rhyan is now part of the Year Up talent pipeline serving more than 10 Amazon locations nationwide. The company, which is one of the largest private employers in the world, first partnered with Year Up in 2016 and has since hosted more than 175 Year Up interns and hired more than 245 graduates.

“Amazon’s partnership with Year Up creates a path to employment for groups of people who have been underrepresented in IT,” said Marcus, a Regional Information Technology Manager at Amazon. “Through the program, we’re able to contribute to our community and give people an opportunity to have a career.”

“This program is life-changing for a lot of people,” he continued. “Rhyan is a superstar. He’s a great young man. He just needed opportunity and coaching.”

Rhyan’s passion for computers started in high school, when he studied both computer programming and welding. After graduation, he decided welding was the more practical route. He enrolled at Texas State College to study the profession, until a concussion forced him to miss classes and eventually leave school.

A friend who had graduated from Year Up and landed a position at Bank of America recommended Rhyan take a look at the program. He attended an information session and saw it was his door to corporate America.

Once he completed Year Up’s learning and development phase, Rhyan earned a six month internship at Amazon as an IT Support Technician. “It was a dream,” he said. “I was amazed that this company gave me a chance because I’m not used to getting chances like that. I wasn’t sure what to expect, but I was open and ready for the challenge.”

At his internship, Rhyan applied several of the skills he honed at Year Up, including networking and connecting with his peers to talk through challenges. His work ethic was impressive, Marcus said. “If he didn’t know something, he would go and dig up solutions. He was always making an impact.”

“Marcus was one of my first managers to believe in me and push me toward greatness,” Rhyan said. “I saw how assertive he was, and that was the type of manager I needed. He taught me how to be proactive and to be careful at the same time, and to make sure I go through everything, don’t miss a single step, and understand all that I’m doing.”

“The mindset I was in was that this is one big interview and I need to learn as much as I can,” he continued. “I shadowed coworkers, read policies, studied SOPs [standard operating procedures]—that’s how I learned a lot of the basics.”

That dedication to learning paid off: Rhyan was hired full-time and has taken on a leadership role with Year Up interns at Amazon. Working with Marcus, who has become the Year Up mentor chair for Amazon’s IT operations, Rhyan manages more than 20 Year Up interns and has onboarded two new hires. Amazon requests more than 80 interns per year overall.

Amazon’s partnership with Year Up creates a path to employment for groups of people who have been underrepresented in IT. Through the program, we’re able to contribute to our community and give people an opportunity to have a career. This program is life-changing for a lot of people.

One of the mentoring resources that’s always been there: Marcus. Guiding Rhyan and the Year Up interns keeps him young, he says, and gives him a chance to share lessons from his own life.

“I came from a one-parent family in an economically depressed neighborhood in Pensacola, Florida. But I made different choices,” Marcus said. “I went to the military for 20 years. I got my education and pursued jobs. These young people see me as an accomplished man, but I tell them about my struggles and there’s a bond that’s there. You’re taking people out of their typical environment and they might not be comfortable. I think this helps bridge that gap.”

To continue advancing his career, Rhyan has enrolled at Dallas Community College to earn his degree in computer science. His goal is to break into the cybersecurity field, so he is taking additional courses to soak up as much knowledge as possible.

“Before Year Up, I was just bouncing between jobs,” he said. “Now, I’m following a career path.”

Rhyan is just one of the thousands of Year Up graduates ready to grow their professional careers.

The Power of Vulnerability: Daniel Silva

How this Year Up graduate went from barely making ends meet to a Corporate America career.
See more