Paving the Way at Wayfair 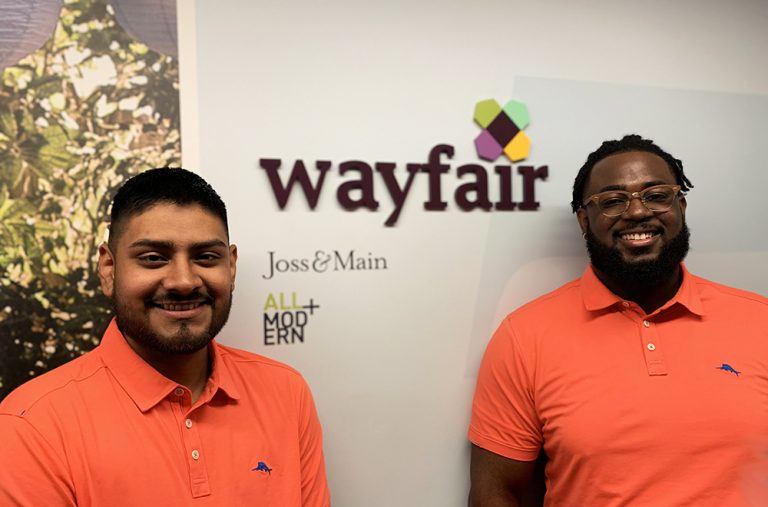 As the first Year Up interns at the online retailer, Freddy Sandoval and Richard Hector Jr. helped show the company a new pipeline of talent.

As Freddy Sandoval and Richard Hector Jr. anxiously awaited the announcement of their Year Up internships, both wanted to work in Boston's prestigious academic sector. They found it hard to hide their surprise when they found out they were the first two interns going to Wayfair, one of the world's most innovative online retailers.

Why? They thought Wayfair was just a furniture company. "We didn't know anything about Wayfair," laughs Freddy, "and we were just moping for like a week straight. Then, we got a tour."

Seeing the office in the city's Back Bay neighborhood, Freddy and Richard realized Wayfair was much more than they realized. The open environment and tech-forward approach piqued their interest. Once they dove into the internship itself, they found the work played into the IT skills they learned at Year Up and excited them about their career possibilities.

"We weren't really treated as interns to begin with," Richard said. "The work we were doing was what actual employees were doing."

As the first Year Up students to intern at Wayfair, Freddy and Richard's capabilities, confidence, and drive set the stage for their success and that of future interns. Since Freddy and Richard arrived in 2017, Wayfair has hosted more than 40 Year Up interns.

In fact, Freddy and Richard's experience at Wayfair has heralded a growing initiative at the company: Wayfair is working to recruit more than 50 percent of its projected 3,000 hires in 2019 from non-traditional pathways like Year Up. Next year, Wayfair will grow to host more than 40 Year Up interns annually.

"Our partnership with Year Up has allowed us to hire skilled local talent into high-impact roles," said Chris Mannion, Wayfair's Head of Campus and Early Career Hiring. "We're excited to see graduates of the Year Up program grow at Wayfair and bring fresh and diverse perspectives to our team."

Freddy and Richard struck up a friendship at Year Up through early morning conversations while waiting for the building to open. Their paths to Year Up wound through manual labor and hourly jobs. Richard had been working at a glass factory in Easton, Mass., and Freddy bounced between several retail jobs in metro Boston the airport, McDonald's, a café in Somerville. Both wanted stable careers, work they enjoyed, and opportunities for higher education, but weren't sure of the best path to achieve those goals. As Freddy put it, "I felt like I was living someone else's dream. I felt like I should have been doing more."

Freddy and Richard's relationship meant even more when they navigated new ground as Wayfair interns. Freddy and Richard applied their skills and found support from Year Up coaches, Wayfair coworkers and managers, and each other, having lunch together nearly every day (they still do). They were also grateful for Wayfair's supportive and welcoming culture, which made them feel like part of the team from the beginning.

"This was the first job that I didn't feel dread when I got up in the morning," Freddy said. 'I was working with my team and I've always been into tech, so it was great."

At the end of their internship, both Freddy and Richard were hired full-time as software analysts. They found themselves living their own dream: permanent members of the Wayfair team, spending their days on work they found fulfilling and seeing a wide field of career growth ahead.

"From their first day at Wayfair, Richard and Freddy presented as more than interns," said Barry Graham, Wayfair Director of Software Quality Assurance and Freddy and Richard's manager. "Building on the skills they developed at Year Up, each has become a key contributor to the Wayfair Application testing team. One year into their full-time roles as Software Quality Analysts, Richard is about to embark on a business degree, while Freddy hones his technical skills on the job, pursuing his dream of becoming a software engineer. Wayfair and Year Up helped to provide an opportunity. Richard and Freddy have and continue to seize upon it."

Seizing opportunity also means sharing it, so Freddy and Richard created the mentorship program at Wayfair for incoming Year Up interns. "One thing I've stressed to the interns that come to Wayfair is that it's all on you," Freddy said. "All your decisions are yours to make, and your future is in your hands. You have to have a long-term plan of what you want to do."

Their leadership also extends outside Wayfair's walls, as they still volunteer at Year Up and tell young adults about the program. "Step out of your comfort zone and be open with new experiences that may not seem to be the best at first," Richard advised future students. "As long as you give them a try, that's all that matters."

Freddy and Richard's contributions to the company, paired with Wayfair's commitment to create a more diverse, inclusive workforce, have laid a strong foundation for a growing partnership. This collaboration is a win-win: creating career pathways for more talented young adults and continuing to build Wayfair's business.

Freddy and Richard are just two of the thousands of Year Up graduates ready to grow their professional careers. Tap into top talent today.

Growing up in the foster care system in Boston, Luz Villar was determined to be successful despite daunting obstacles.
See more