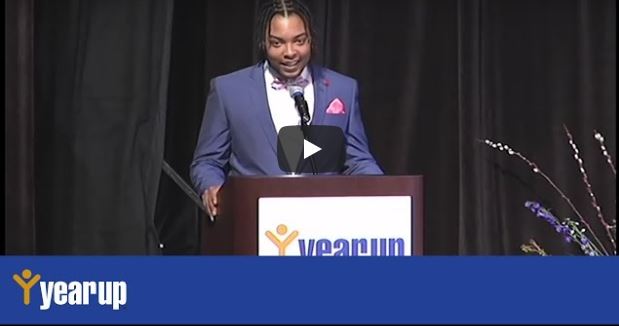 Before starting Year Up, I was wrongfully accused of a crime I didn’t commit.

I walked out of a lounge where a crime had happened and got in my car. I drove five blocks before being pulled over at gunpoint. The officers told me I was being arrested and refused to tell me why. They said I matched the description of a perpetrator: a black man in a black hoodie. That’s all.

I was guilty of being a black man in a black hoodie in the wrong place at the wrong time. I had a court case to fight, a 6:00 p.m. curfew, and an ankle monitor. My ankle monitor was a constant physical reminder of the effect this court case could have on my life and my future. I worried that this dark cloud would affect my ability to have an internship and to graduate from Year Up.

Ultimately, over a year later, I was acquitted and able to move forward, but my situation had almost been enough to shatter my own belief that I had a future and that I could make something of myself. The staff at Year Up gave me the support I needed to believe in my future. They helped me remember that I was valuable, and I became a leader on my training floor.

At the end of our training period, I received a Core Values Award for embodying Year Up’s commitment to respecting and valuing others. This is the kind of leadership I believe in. Anyone can stand up and say they want to be a leader, but for it to happen naturally, for me to earn it, I am proud of that.

Before Year Up, I was motivated and knew where I wanted to go, but I didn’t know how to get there. The neighborhood I grew up in was violent to the point where I barely remember going outside until I was about 7 years old. I witnessed my first murder at the age of 14 years old. Just recently, a fifteen year old boy that I watched grow up was shot while sitting in a car in front of the house where I used to live. I could have become a statistic, but I wanted something bigger than that.

Year Up changed my perspective and boosted my confidence. Now, I am a Financial Assistant at Harvard Business School, and I’ve started my own clothing line. Setting aside stereotypes and odds about young black men, we all have the same 24 hours each day. What separates us is what we choose to do with them. I’ve chosen to do something.

Growing up in the foster care system in Boston, Luz Villar was determined to be successful despite daunting obstacles.
See more