A Call to Do Something: Help Us Close the Opportunity Divide 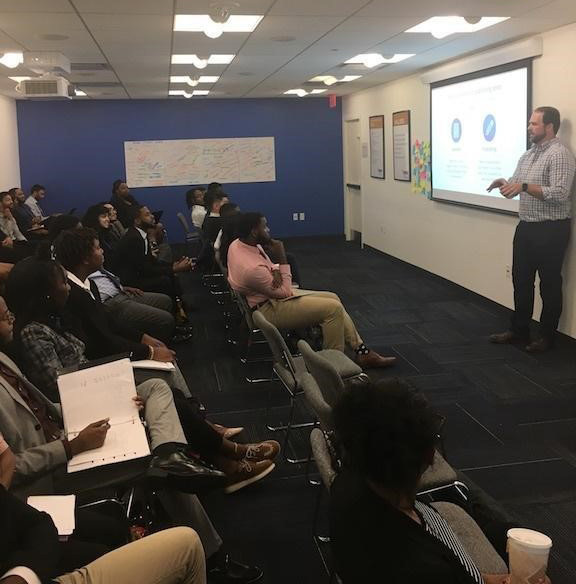 Andrew Phillips is Senior Account Executive at LinkedIn and has been engaged with Year Up for 8 years as a mentor, volunteer, and donor. Read his story below:

I've always tried to be someone who exudes happiness. One of my favorite quotes is from Emerson: "Nothing great was ever achieved without enthusiasm." Enthusiasm! What a word! And while it's difficult in practice, I've always tried to approach every day with a joyful heart.

But watching George Floyd die left me numb and heartbroken. I can't square the depravity of what happened so undeservedly to an innocent fellow citizen with the simple happiness I've tried to carry with me as my true north. When that sadness is compounded by the scenes of destruction and violence unfolding in cities around the country, the sobering reality that yes, this happened again, the sheer weight of sorrow seems overwhelming.

Joy seems ill-conceived, even inappropriate, in a time like this.

But, I'm going to attempt, in my own small way, to invite you to concentrate your despair into something positive. I'm going to invite you, particularly if you are financially secure, college-educated, and occupy, as I do, positions of social and economic advantage (as I do as a white man in tech), to do something.

Specifically, I'm going to ask you to volunteer time and energy to an organization bringing opportunities to disadvantaged young professionals around the country, the vast majority of whom come from communities of color, affected by generations of both unconscious bias and overt marginalization.

I'm going to introduce you to Gerald Chertavian and the team at Year Up.

I first heard of Year Up after catching my former Stanford football teammate Trevor Hooper (find him at the 5:30 mark in the video) during a 60 Minutes segment on a unique professional training program for young adults.

I had never had the concept of the 'opportunity divide' expressed to me so clearly, but it immediately resonated with me.

During my time on the football team at Stanford, I found myself in the minority for the first time as a white kid from very affluent suburbs, while the majority of my teammates were racial minorities from varying backgrounds. It's safe to say that many of them faced much tougher circumstances than I did growing up. In addition to really seeing for the first time the realities of being black in America through my black teammates, it became clear to me that many of the lessons that I was taught about the playbook of the adult working world (how to network, how to understand the social give and take of building relationships and gaining access), were taught rather than naturally assumed behaviors.

No natural ability or sheer force of will can make up for the fact that the soft skills of navigating corporate America have to be taught.

I've often heard LinkedIn's former CEO Jeff Weiner speak to the idea of opportunity. Namely, that while talent is evenly distributed, opportunity is not. There exists an elaborate web of challenges for talented and motivated individuals on the fringes of society to navigate that people themselves often bear zero responsibility for. Some are physical, some logistical, and some are more subtle, such as not having a proper understanding of how to network or ask for introductions. This is one of the crucial areas that Year Up addresses in its training.

Over the course of a year, Year Up brings its students through an intensive training program covering business etiquette, finance, accounting, sales, public speaking, and information technology. Students who make it to the next stage are guaranteed an internship, all while earning college credits and being paired with mentors and advisors along the way. The program is grueling in its demands; over a full quarter of most starting classes do not meet the marks required for placement in an internship or graduation.

But what those statistics don't capture are the years of prosperity I've witnessed after the program. Just last week I saw a post on LinkedIn that a young man I met with a few times after leading a LinkedIn training had just purchased his first home (in the DC metro area!). I've served as a security clearance reference for a mentee who earned a cybersecurity job paying well into six figures a handful years after graduating. This program pulls people out of generations of crushing poverty and gives them a real shot at the American dream. You can read some of their stories here.

"Be The Change You Wish to See in the World"

Year Up needs your skills and your energy, yes. But more than that, I want to invite fellow graduates of elite schools and those in positions of influence into the realities of these young people and the trials they're going through to achieve personal success. I want to grant you the opportunity to empathize with their stories, to hear the challenges they've met and overcome only to be denied again and again a proper opportunity, the way that I've learned from my own Year Up mentees through the eight years I've served as a volunteer.

Despite working in the social media industry, I'm not its biggest fan. I'm wary of the societal pressure to respond to everything, to confirm to your network that yes, I too am outraged. But rather than just add a confirmation of my outrage over what happened last week into your feed, I'm inviting you to help set the course for changing the way the professional world sees the underprivileged and how we as professionals define success. I'm inviting you to initiate relationships with people who may not look like you or come from where you come from. I'm inviting you to reach down and pull a couple of hard-working young professionals along with you as you climb your own ladder.

We cannot change what happened to George Floyd. But we who occupy positions of influence and advantage can take this moment as a challenge to do more. I personally will be reaffirming my commitment to LinkedIn’s Plus One Pledge, ramping up my activity with Year Up beyond my 1-1 mentee relationship, and finding ways to help young professionals in my community here in Minnesota.

Privilege bestows many gifts; one of those gifts is an obligation to affect positive change in the world. My alma mater has this concept baked into the lore of its founding: legend has it that following the death of his son from typhoid fever while traveling abroad, Leland Stanford, who with his wife Jane Stanford founded Stanford University, fell into deep despair. The night of his son's death, the legend goes, his son visited the wealthy railroad tycoon in a dream. Leland lamented to his son that he no longer had anything to live for, to which his son replied: "Papa, do not say that. You have a great deal to live for. Serve humanity."

I often think of this story as a counter against what I occasionally convince myself about the purpose of achievement, education, and my career. As a Christian, it’s my belief that we are all called to love one another, but also that especially to whom much has been given, much is expected.

If this spoke to you, Year Up is your shot to make a positive difference to maligned communities.

Join us in closing the opportunity divide.

--
Learn more about Year Up at yearup.org.

Year Up has locations around the country, and you can reach out to your local chapter straight from the website.

Here are ways that you can volunteer with Year Up:
Read and review resumes.
Mentor a Year Up student and help them navigate their internship and beyond.
Conduct mock interviews.
Provide internships.
Guest lecture, judge public speaking competitions, and share your experiences with students.

Donate to Year Up here.

If you have questions about Year Up or the experience of becoming a mentor, please reach me at anphillips@linkedin.com.

Special thanks to my friends John Montgomery, Jonathan Martin, Ousman Jobe, and Professor Ron Granieri of the US Army War College for your help in preparing this piece.