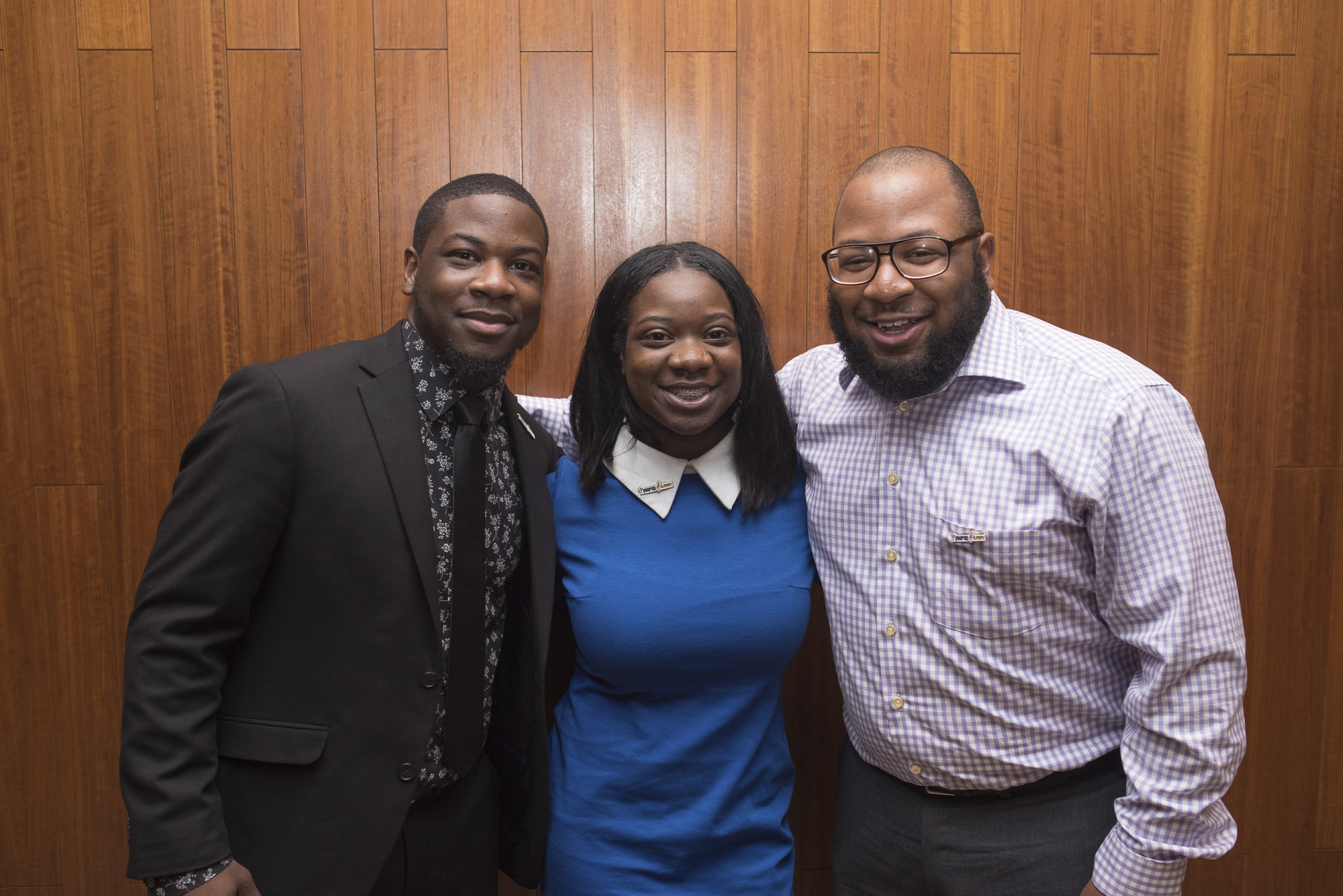 With roots in gospel music, the Tower siblings do everything together. Year Up was no different.

Alonzo, Kadeesha, and Tim Tower say their family can't go to the store without one another. Alongside their three other siblings, they have performed gospel music as a collective since they were small children. When attending church, all six Tower kids sit in the same row as their mother. Attending Year Up? For these three, it was no different. The Towers all went together.

Kadeesha first heard about Year Up from her college counselor and was adamant that Alonzo apply. He had hit dead ends when applying to retail jobs, and a couple of months of college showed him higher education didn't fit him out of high school.

Year Up said that Chase wanted to hire me on the spot during my internship. When I did get hired, I ran home and I told my whole family.

Kadeesha informed Alonzo that Year Up could help him reach his professional goals. The most remarkable part of Kadeesha's cheerleading? She hadn't been through the program herself.

"I was just curious," she said. "I wanted to see someone else going through it in case I was wrong. I picked my big brother."

Alonzo did his research, forged his way into the program, and quickly confirmed that Kadeesha was right. What he first discovered was the power of networking.

"Before I started Year Up, I didn't like hanging around anybody," he said. "I saw a difference in a week or two, since Year Up really prepares you for the corporate world."

That preparation and Alonzo's love for customer service paid off at his JPMorgan Chase internship. Thanks to his passion, JPMorgan Chase hired Alonzo as a full-time teller before he graduated from Year Up. He was the first intern that JPMorgan hired through its Year Up partnership in Chicago.

"Year Up said that Chase wanted to hire me on the spot during my internship," he said. "When I did get hired, I ran home and I told my whole family."

Six months after sharing Alonzo's excitement, Kadeesha decided it was her turn. She had pursued cosmetology after high school, getting her hairdressing license and styling hair out of her home, but she wasn't interested in a hairdressing career.

Once Alonzo confirmed the potential for success through the program, Kadeesha applied to Year Up and found the same benefit of learning how to network. The tips on dressing professionally also appealed to her, she said, as well as hearing testimonials from other young adults. Kadeesha, who describes herself as shy, took her networking strategy to the next level at her Bank of America internship, asking for feedback and meeting with her manager every Friday.

"I wanted my managers to know that I wanted to grow," she said. "I was concerned about my career and wanted to be valuable to the company."

Kadeesha's manager also put her name out as a committed employee. Now, she works as an operations analyst for another manager who she worked with during her internship.

Like his siblings, Tim worked full-time after high school, stocking products at an auto parts store. He soon hit a ceiling, not advancing in his career or his pay.

"My mind was all over the place," Tim said. "I just wanted to find a way to add value."

Seeing his siblings' success, Tim decided to go to Year Up. Alonzo and Kadeesha coached him on the program's mock interviews and resume reviews, and Tim gravitated to Year Up's lessons on self-advocacy.

"I was way too quiet starting the program," Tim said. "Year Up taught me to speak up and step up."

Tim took those lessons to his United Airlines internship, networking within the company when he realized a job wasn't guaranteed.

"I was told early on that there might not be a full-time spot for me on the team," he said. "I put some things aside to see how I could reach my goals. I set up my own meetings, my own lunches, and met with people so they could see what I was interested in."

Once Tim finished his internship, the Tower siblings went three for three on the career front: he was hired full-time as a United Express human resources representative.

Even with new pathways and Kadeesha's decision to continue her Bank of America career in Jacksonville, Florida, the Tower siblings keep an easy camaraderie that comes with shared experiences. They describe each other as intelligent and "the best at managing money" (Alonzo); "halfway serious and halfway goofy" (Kadeesha); and a "mystery man" who fights for what he wants (Tim). They attribute this closeness to singing together and their pride in being Year Up alumni.

Keeping it in the family, Kadeesha has passed the cheerleading torch to new Year Up believers: The Tower parents.

"I think they're the strongest advocates for Year Up," Kadeesha said. "Everywhere they go, if they see young adults, they tell them about Year Up."

Learn how Year Up has impacted other young adults' careers.

After seizing the opportunities afforded to her by DACA and Year Up, Cecilia Sanchez went on to assist Year Up students with their own transformations.
See more