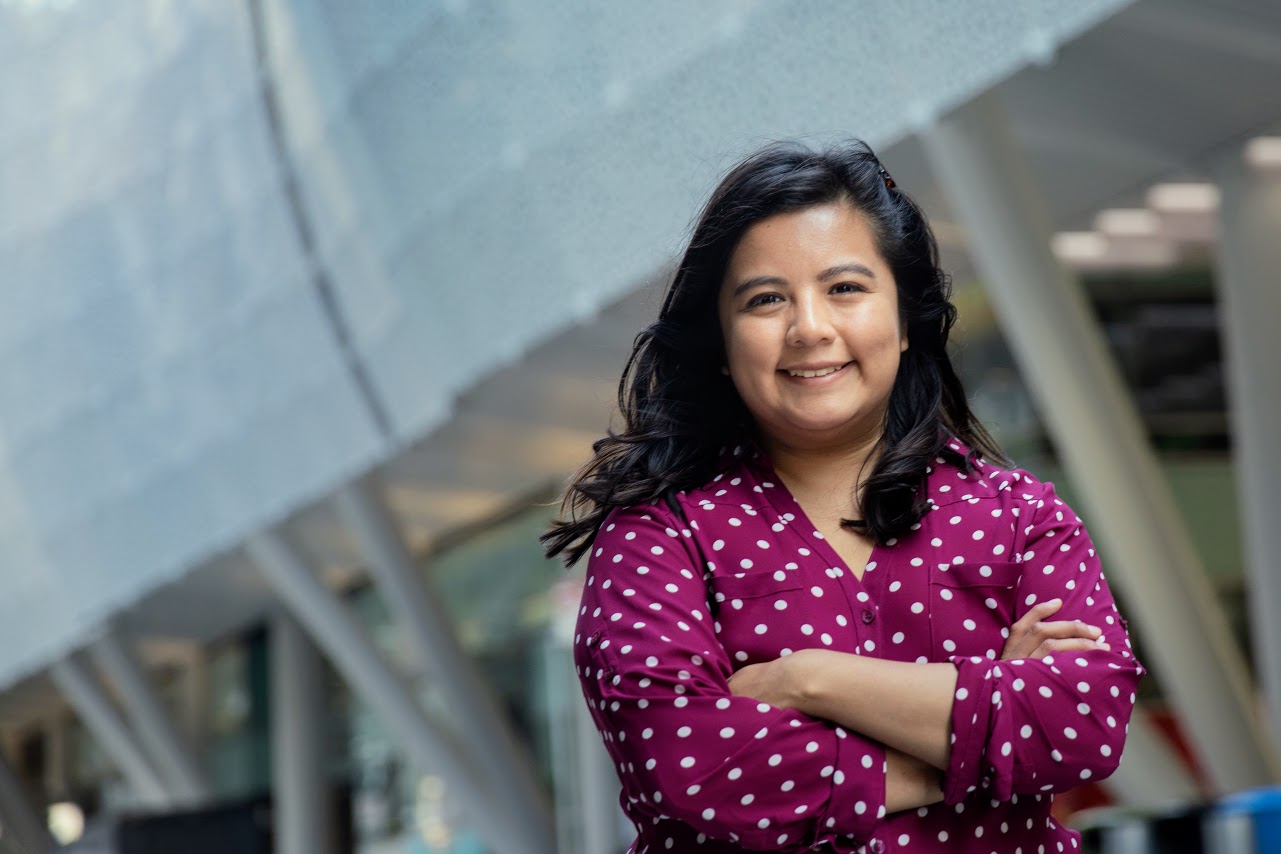 After seizing the opportunities afforded to her by DACA and Year Up, Cecilia Sanchez went on to assist Year Up students with their own transformations.

A voice inside Cecilia Sanchez’s head was telling her this wasn’t right.

The year was 2011 and Sanchez, still in high school, was meeting with her college counselor. A top student, she had already begun to visit campuses. But the counselor, noting the barriers posed by her undocumented status, was telling Sanchez her college dreams were unrealistic, and recommending she take a circuitous path just to ensure that she could secure a job after graduation.

“He told me there were other people who went back to their countries to study, then returned with a work visa,” Sanchez recalls. “He said that was probably my best option.”

Sanchez was taken aback by the advice. Her family had moved to the United States from Pueblo, Mexico, when she was 4; far from being “her country,” Mexico barely registered in her memory. Sanchez also knew that her parents had the equivalent of bachelor’s degrees from Mexican institutions that had proved to be of little value in the U.S.

This made no sense, she remembers thinking. “Why would I want to go school in Mexico when I hadn’t been there since I was a small child? Was this really the only option?”

But Sanchez was also scared. Most of all, she lacked the confidence to question the advice coming from the authority figure sitting across from her. So she merely nodded.

While I was a student at Year Up, I learned how to lift my voice.

That scared teen would be hard-pressed to recognize the woman she would become through a remarkable seven-year period of transformation and personal growth. By 2017, Sanchez was shaking hands with former President Barack Obama. And in her previous role, she trained new talent for the organization that paved the way for her to obtain an education and meaningful career.

It’s a success story Sanchez couldn’t have predicted during her lowest moments as a teen. Growing up in Chicago, she gave little thought to her undocumented status. By high school her grades were landing her in the National Honor Society. But when it came time to apply to colleges, Sanchez began to realize she wasn’t on a level playing field with her peers. They were filling out Free Application for Federal Student Aid (FAFSA) forms; Sanchez had no idea what that was. “My college counselor pulled me aside and really burst my bubble,” she recalls. “He told me I couldn’t qualify for FAFSA, and that scholarships were limited. He said college wasn’t really an option for me. He pushed me to think about work, but I wanted an education and a career.”

Paralyzed by indecision, Sanchez graduated from high school in June 2012 with little sense of what to do next. Then, President Obama announced the Deferred Action for Childhood Arrivals (DACA) policy, which would allow Sanchez to apply for a renewable two-year period of deferred action from deportation and become eligible for a work permit. Finally, Sanchez felt hopeful. “This seemed to fall out of nowhere, just in time,” she says. Sanchez suspects she might have followed the counselor’s advice and gone to Mexico, even against her best instincts, had it not been for the new policy.

DACA didn’t solve everything; Sanchez still wasn’t sure how she was going to afford the type of schooling that would provide the career opportunities she desired, and the process of obtaining her DACA status had put her in significant debt. Sanchez got a job at a restaurant and was saving her money in the hopes of one day being able to afford college when, in 2014, she had a fateful conversation with a close friend.

“She told me she was in this program, Year Up, and was about to start an internship at Allstate,” Sanchez says. “She invited me to go with her to an information session.”

Once Sanchez learned more about the program, she was sold. “I was really interested in all of the things I was going to be learning and how fast the program was going to go,” she says. “And I couldn’t believe I was going to be paid to go to school, do an internship and even get college credit. Year Up seemed like such a smart way to build a brand and get your foot in the door. Once again, it was perfect timing. Everything was falling into place.”

The professional training and experience Sanchez obtained during her time as a Year Up student proved to be everything she had wanted. But the time at Year Up was equally valuable as a vehicle for Sanchez’s personal growth. “While I was a student at Year Up,” she declares, “I learned how to lift my voice.”

For the first three months of the program, she had remained the same reserved young woman who had been afraid to air her dissenting opinions to her college counselor. But as time went on, Sanchez — who describes herself as highly analytical — began to notice a common thread among the successful Year Up alumni she encountered through the program. “They knew how to read the room and put energy into it,” she explains. “I could see how confident they were in what they were saying, and the way they were able to advocate for themselves. And I knew I wanted that. I had a lot of thoughts, and I needed to begin expressing myself.”

By the time she was an intern, Sanchez had been assigned a mentor through the Year Up network, Lauren Timm, who helped her emerge from her shell. “She had all of the things I wanted in terms of growth — confidence, charisma, and the ability to build relationships,” Sanchez says. “I wanted to learn those things from her, and she taught me through her examples, including inviting me to networking events.”

Personal growth isn’t always easily detectable by those who are living it; sometimes it takes others to recognize the change. Sanchez says it hadn’t occurred to her just how far she had come until her Year Up graduation ceremony in July 2015. “A lot of people came up and thanked me for what I had done for them during their journey at Year Up,” Sanchez recalls. “It made me realize that people saw me as a leader.”

It was an emotional day — and as one graduate after another sang her praises, Sanchez experienced an epiphany. “I thought, I don’t want to leave this place for a long time,” she says. “That’s when I started thinking about work opportunities at Year Up, and about leadership in general and how much I could offer.”

Not long after graduation, Sanchez was hired at Year Up Chicago, initially as an operations coordinator— supporting the process of onboarding new staff members. In November 2017 she joined Year Up’s national human resources team as an HR staff learning specialist. In that role, Sanchez served as the primary point person to sites and national teams for all new-hire training and learning.

Working at Year Up, it’s all about the mission and our students. When I reflect on how much support I got when I was a student, it makes me want to give this my all.

During her time in the role she shared that she couldn’t be happier. “The skills I’m developing are going to be applicable throughout my career,” Sanchez says. “And working in HR at Year Up has been eye-opening. There’s a different way of thinking about what talent can look like. It’s so diverse, and to see so many different ideas and experiences come together is something I love. Getting to travel to different sites for training, I meet all of these young adults and get to hear their stories. And wherever I go, it’s the same — walking through the Year Up doors, right away you feel the empowerment of young adults.”

Since her time at Year Up began, Sanchez had also had much to celebrate outside the workplace. After she graduated, she married her longtime partner, Carlos Pineda with whom she had gone through the Year Up program. Because her husband is a U.S. citizen, Sanchez was able to obtain permanent residency status, with plans to apply for citizenship herself. During her Year Up internship, she earned a scholarship that allowed her to start taking classes at Harold Washington College in Chicago; Sanchez then began the process of completing her degree through Southern New Hampshire University, an online program for full-time employees.

In October 2017, Sanchez began a seven-month stint as a peer advisor for the Obama Foundation, helping to design and execute trainings aiming to motivate young people to effect change in their communities. That same month, she had a chance to meet the former president when he made a surprise visit to the Gary Comer Youth Center on Chicago’s South Side, where Sanchez had just participated in a full day of training. As she stood in line for a picture with one of her heroes, she knew she would have all of 10 seconds of one-on-one time. An earlier version of Sanchez might have had little to say, but now she was determined to make the most of it.

“I hugged him — it was the best hug ever,” Sanchez recalls. “We took the picture and I said, ‘Thank you so much for DACA. It changed my life completely.’ He just kept on smiling and he said, ‘Thank you, Cecilia.’ It was a moment I’ll always value.”

In her position at Year Up, Sanchez embraced every opportunity to give back by coaching Year Up students. “When I was making that difficult decision of whether to go to Mexico, what I really needed was not someone to tell me how to live my life, but someone to be there for me and listen to me,” she says. “It’s a privilege to now be able to serve as a guide and lend an ear to young adults who might be having a difficult time.”

“Working at Year Up, it’s all about the mission and our students. When I reflect on how much support I got when I was a student, it makes me want to give this my all.”

Want to experience a change in your life like Cecilia?

With roots in gospel music, the Tower siblings do everything together. Year Up was no different.
See more