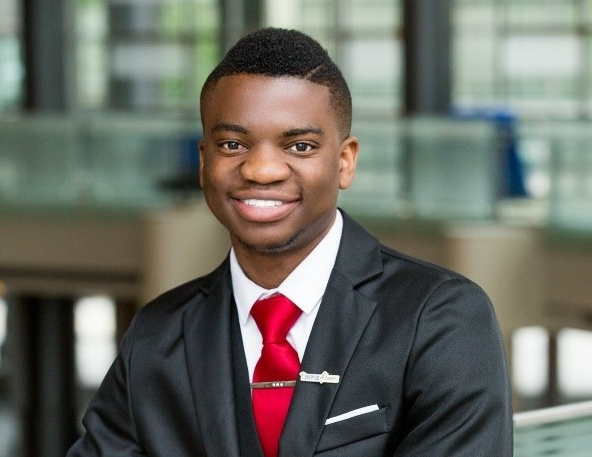 “I told myself, ‘I’m going to give it 100 percent and I’m going to see where it takes me,’” Joseph said of his Year Up internship.

Since he was in fifth grade, Joseph Griffin has called Seattle his home. Over the last 12 years, his passion and perseverance have led him to another home in the Emerald City: this time for his career at Amazon, one the largest online marketplaces, internet companies, and private employers in the world. The Year Up Puget Sound graduate works as a global support engineer on Amazon’s IT services team and is pursuing his dream role as a certified Amazon Web Services solutions architect, taking complimentary courses through the Amazon Technical Academy.

“The teamwork and family environment I’ve found here is something I really enjoy,” Joseph said of his time at Amazon. “Even with all these people, we’re still connected. You always have support.”

That family is growing by the day: as of June 2020, Joseph is one of more than 110 Year Up interns hosted and 105 graduates that Amazon has hired since the tech company began partnering with Year Up in 2016. The company now requests 45 interns a year across more than 15 locations nationwide, and Joseph has taken a leadership role in sharing his story and his support, providing those Amazon interns with the career coaching that was so helpful to him.

After working at Amazon for a couple of years and with the experience and skills earned from Year Up, I realized that I have all the tools I need to succeed and perform at a high level like anyone else here. To have had this opportunity to be placed for an internship at Amazon was a huge blessing.

Joseph, who was adopted from Malawi, was a solid student in high school and earned a scholarship to Embry-Riddle Aeronautical University in Florida. He decided to study computer science, but tuition increased after his first year and Joseph couldn’t afford to stay—even with his scholarship.

A job at Home Depot upon his return gave Joseph a chance to weigh his options. His aunt, whose business partnered with Year Up, told him about the program at a family dinner and he decided to apply. “It turned out to be the best decision I ever made,” Joseph said.

At Year Up, Joseph specialized in Helpdesk/Desktop Support, where he learned key technical skills in areas like operating systems, computer networking support, customer service, and computer hardware. “I had great instructors,” Joseph said of the program’s Learning and Development phase. “It felt like a second home with a second parent, where you could ask them anything and they would help you with any goals you had.”

The Learning and Development phase also helped Joseph build professional confidence by teaching interpersonal and business communication skills, such as how to introduce yourself and have a successful networking conversation. “I still use those today,” Joseph said. “Those soft skills and the instructors supporting me got me out of my shell. I had a safe space to express myself.”

Joseph had a chance to build on those skills and his computer expertise at his internship with Amazon. He found a supportive supervisor who wanted to promote his career interests, asking Joseph right away what he wanted to accomplish during the internship. Since Joseph had studied coding and cyber security during his time in college, his supervisor connected him with software developers on the Amazon Web Services team. There, in addition to his work and experience gained as an IT intern, Joseph learned about artificial intelligence and other web services.

“I thought to myself, ‘This is exactly what I want to be doing,’” Joseph said. “I’m at this great company and I’m really doing it.”

Joseph’s hard work and passion for the job paid off in July 2018: he was hired full-time at Amazon before his internship even ended.

“It was a huge relief and a huge accomplishment. I realized that I do have the potential to do anything,” Joseph said. “Year Up was a big part of giving me that opportunity to make something of myself.”

“When I realized I couldn’t go back to college, it was a sad moment since I didn’t know what my future would look like. But there was still hope,” Joseph added. “I never gave up. I always looked for other opportunities, and an opportunity showed up and I took it. I told myself, ‘I’m going to give it 100 percent and I’m going to see where it takes me.’ And it took me further than I ever thought it would.”

In his full-time role, Joseph has helped with Amazon’s COVID-19 response by developing a process to support the company’s employees in their new remote settings. His commitment to making an impact also includes consistent involvement in Year Up, where he now acts as the director of special events for the Puget Sound alumni board and speaks to large crowds about his experience. He is also planning to earn his degree in computer science online while continuing to work full-time.

“After working at Amazon for a couple of years and with the experience and skills earned from Year Up, I realized that I have all the tools I need to succeed and perform at a high level like anyone else here,” he added. “To have had this opportunity to be placed for an internship at Amazon was a huge blessing.”

Joseph is just one of the thousands of Year Up graduates ready to grow their professional careers.

Biruk Fare Designs a Career in UX at Amazon

"...I had set out to become a designer which wasn’t an easy target. But starting as a Quality Assurance intern and becoming a UX Designer has been my biggest accomplishment at Amazon.”
See more

"When my sister reminded me about Year Up, I realized I had a lot to lose, but even more to gain. I had one opportunity to do what I hadn't: thrive."
See more