Kim Alejos: "Believe in yourself and push forward." 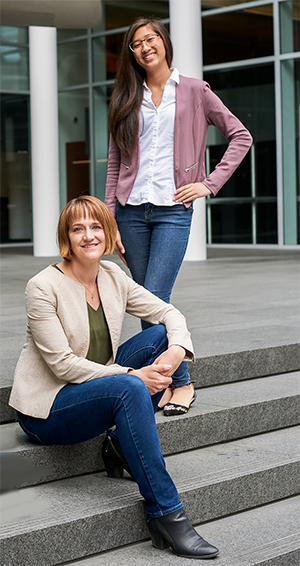 "The first-place winner is Kim Alejos!" Kim was shocked. She was the winner of Salesforce's semi-annual Year Up Intern Recognition Event. Now she's a full-time Salesforce technical writer. The past two years have been a whirlwind she could have never predicted.

"I knew immediately that I wanted to hire her," said Sue Warnke, Senior Director of Content Experience at Salesforce and a huge champion of the Year Up program. "She had such a kindness about her, asked great questions, listened intently, and delivered quickly." Kim tends to make an impression.

We need to backtrack a little, though.

Kim's parents are from the Philippines, each immigrating to the United States in their 20s. Her father was a mechanical engineer who worked at hotels in San Francisco for most of his career. He met Kim's mom at one of those hotels, where she worked as well—and the rest was history! They married a few years later.

Persevere no matter what, even when times are difficult and it feels like the world is crumbling. It's not. Believe in yourself and push forward. You'll be surprised how far you can go.

When Kim graduated high school, she was excited to further her education. She recalls, "I knew I wanted to go to college and get a degree, but I didn't know what I wanted to study. So I went the community college route."

But in 2016, all of that changed. Kim's beloved father, the family bread-winner, had an aneurism. Due to that accident, he lost his sight, and life changed for the entire family. "I knew in that moment that I would do anything to help my family," recalls Kim, "even if it meant putting off my education."

Kim's sister had told her about Year Up a few years earlier. Kim dismissed the idea at the time, but given her family's new circumstances, Kim decided to apply to Year Up. The program would give her a living stipend that would contribute something to the family's immediate needs, while they investigated treatment options that might restore her father's sight. Year Up would also continue Kim's education—albeit in a different direction than she had anticipated—and in six months she would have an internship leading to a potential career and the ability to support her family.

To Kim's delight, she got to write during her Year Up training. "I always loved stories and writing," Kim said. "During story time in grade school, I'd be the one sitting in the front row. I made these little storybooks of my own, stapling a few pages together, and I hid them on the shelves in the school library." (Has she been back to the library to see if any are still there? "No, I should probably do that some time!")

"I always thought of majoring in communications with a focus on business writing, but I had no formal writing training before Year Up and Salesforce." Year Up prepared Kim for writing—and so much more.

"We learned corporate etiquette," she added. "They don't teach that in high school or college. Most people learn that through experience, but not those of us who never had exposure to business - how to write an email, how to participate in and run a meeting. Those things are really important. The courses that I took during Learning & Development, such as Intro to Business, Career Development, and Project Management, benefited me immediately as an intern."

Onboarding in Salesforce's technology organization typically requires extensive Agile training. "In my project management training at Year Up, we were introduced to Agile and Waterfall [another project management methodology]. Agile happens to be the foundation we use in Salesforce engineering, so when I came in and said I knew scrum*, Kanban**, and story-pointing, my team was shocked. It saved so much time."

I call it magic. That Year Up can take young adults who have been down on their luck, with little technical background, no business exposure, and six months later they look sharp, know how to build trust, and can lead a project—it's magic.

There's clearly mutual admiration between Kim and Sue Warnke, who manages the technical writing team that Kim joined. That admiration is rooted in what each cites, independently, as common core values. "There's a lot of humility in this culture," said Sue. "We hire for that. People are here not just to work but to have a positive impact on others."

In addition to all the "tricky leadership skills" Kim acquired through Year Up, Sue noticed that Kim and the many Year Up interns who have come through the Content Experience department over the last few years were humble. "To our interns, work is a gift... there is not an ounce of entitlement."

Another shared core value: Family first. That was clearly the case for Kim, who was prepared to change her life to accommodate the family's sudden needs. She was surprised to discover that family is also a guiding principle at Salesforce, where the Hawaiian notion of "Ohana," is shared throughout the entire company. "No work happens until your family is in order," Sue explained. "Once interns enter our door, we embrace them. It's unconditional love."

"Salesforce's values align with Year Up's values," noted Kim. "They view us not as interns but as equal contributors."

Salesforce has two liaisons to Year Up, Nikki Tosiello and Olivia Berkowitz. "The amount of work they put into making sure we feel comfortable is amazing. I've been here for a year, and they still support me. They believed in me from the beginning. Everyone's busy—but they take the time to lend a helping hand. We are in this together."

"Sue," added Kim, "has an amazing ability to see somebody's strengths. She recognized that one of the other Year Up interns was more suited to project management rather than technical writing, and helped that person make the move within the company. Even if it doesn't help her directly, Sue is willing to help others."

Kim is helping others—and Year Up itself—an exemplar of Year Up's "lift while you climb" model. Kim returns to Year Up to speak to current students and stays actively engaged in events and opportunities to support their mission. She recently attended the organization's "Decade Up Event***" to network with old colleagues. At Salesforce's annual Dreamforce meeting, she introduced Year Up to Salesforce's customers, vendors, and other small businesses. And she looks forward to mentoring the next Year Up intern coming to the company on both writing and the "Ohana culture."

What is Kim's message to those following in her footsteps?

"Persevere no matter what, even when times are difficult and it feels like the world is crumbling. It's not. Believe in yourself and push forward. You'll be surprised how far you can go."

And what does Sue see as she looks at Kim and other Year Up interns at Salesforce? "I call it magic. That Year Up can take young adults who have been down on their luck, with little technical background, no business exposure, and six months later they look sharp, know how to build trust, and can lead a project—it's magic. But the biggest gift of all is how they transform a team. A veteran on the team, Kam Kashani, a Year Up mentor multiple times over describes his mentoring as, 'the highlight of his career.' They 'mentor' us far more than the reverse. In the end, everyone benefits from closing the Opportunity Divide."
______________________________________________________________

*Scrum: a short stand-up meeting that sets up the coming day's work or reviews that day's achievements and challenges
**Kanban: a scheduling system
***Decade Up Event: A celebration for Year Up Bay Area to celebrate a decade of expanding opportunity in the Bay Area.

Experience the benefits of closing the Opportunity Divide.