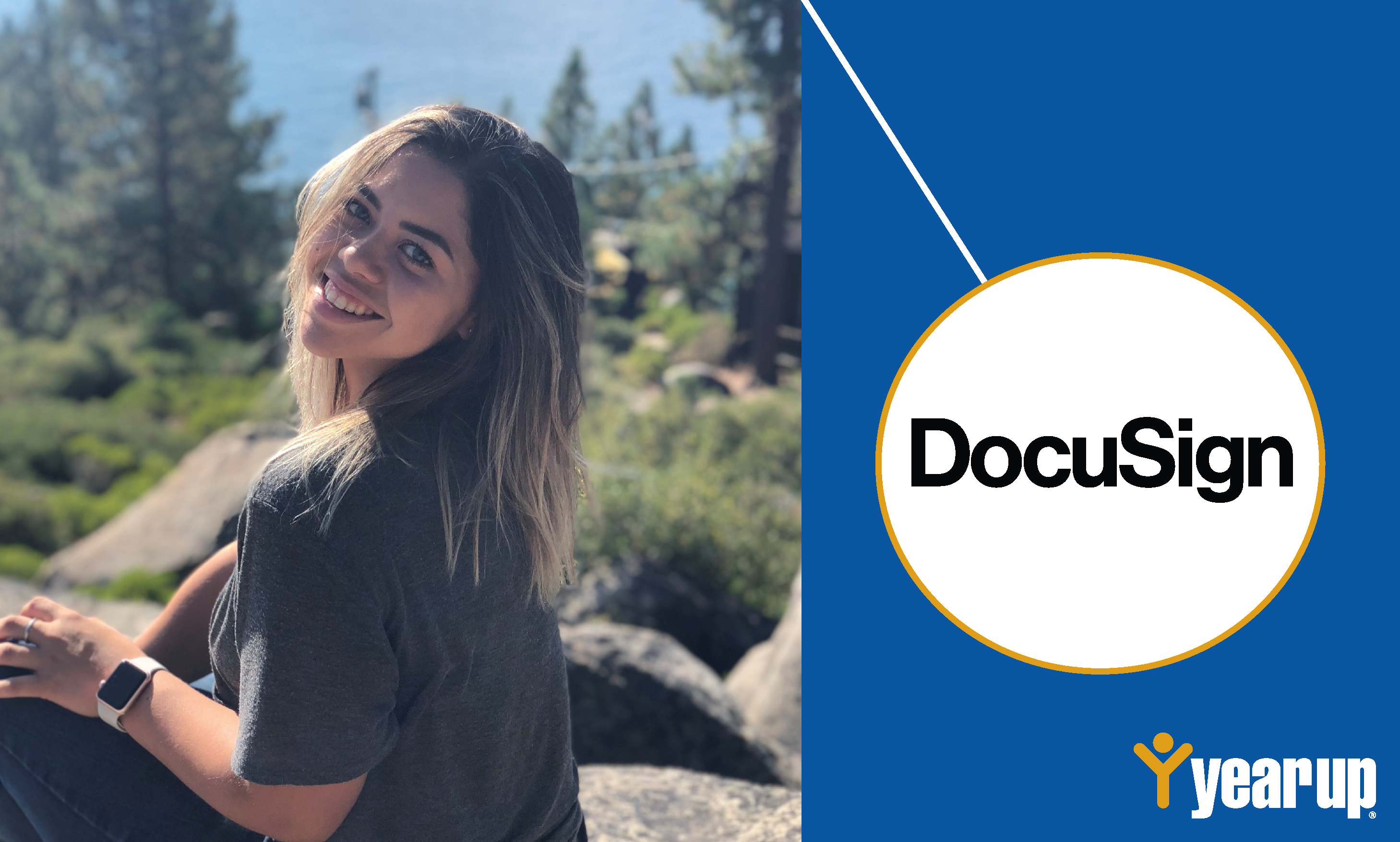 When Gabrielle Pinheiro was enrolled at Year Up Bay Area, she was always the first one in the door. Her father worked in the city, so she left the house with him at 6:30 a.m. and waited at Starbucks until her instructors arrived. Watching everyone come in filled her with gratitude for the family she had found at Year Up and resolve for the career path she was creating.

Gabrielle’s initiative, determination, and penchant for connection paid off: after an internship with DocuSign, a top electronic signature platform and a Year Up partner since 2013, she was hired full-time as a Software Developer Engineer in Testing. After three years at the company, she’s made her mark in their quality assurance department, which she helped build from the ground up.

“Throughout this journey, I’ve reminded myself that I’m here because I’m worth it. I’m the one who put myself here,” Gabrielle said.

Even as an intern, I felt I was part of the company and important to its success. They have always made me feel like I am capable and that I am here for a reason.

A first-generation Brazilian immigrant and Deferred Action for Childhood Arrivals (DACA) recipient, Gabrielle moved to the U.S. when she was eight. Navigating her new country’s higher education system was difficult, and a meeting with her college guidance counselor left her in tears when she learned none of the classes she took counted toward her major.

“I thought, ‘What am I doing?’” Gabrielle said. “I’m spending time and money, and I don’t know where to go and how to get there. My parents moved here so all of us could have a better life. I know I’m capable of more, of learning and going further. There has to be a way to get somewhere.”

After leaving college, Gabrielle talked to a friend who had gone through a similar experience and found a successful internship and full-time job. That’s how Gabrielle discovered Year Up.

“He told me, ‘It’s going to be a long year, but it’s going to be a year that will change your life. Dedicate yourself to it and it will be worth it in the end,” Gabrielle said. “And that’s what I tell people now. It’s hard, but it’s so worth it.”

At Year Up, Gabrielle specialized in quality assurance and learned software testing techniques, databases and programming knowledge, analytical frameworks, and project management techniques and tools such as Gantt charts and Microsoft Project. She described the members of her learning community as like family, bonded through the rigorous learning and the drive to carve out a career path.

When Gabrielle reached the internship portion of the program, her instructor told her there was an opportunity to help DocuSign start a quality assurance team. That chance came with uncertainty, but a lot of reward.

“Even though it was scary, something in my heart told me that this is where I should go,” Gabrielle said. “I wanted to be seen and contribute and know people value me. After a few days, I was really happy about what a great fit DocuSign was.”

She joined the ranks at DocuSign and dove right into the project. Her days consisted of reading through documentation and networking with people throughout the company to understand how the enterprise application system works, then brainstorming how to put the system through the paces.

Her managers were impressed with her confidence and thorough nature, hiring her full-time at the end of her internship. To date, DocuSign has hosted 45 Year Up interns, requests more than 10 interns per year, and has hired more than 15 Year Up graduates.

“DocuSign is still a culture where you walk through the hallways and the CEO knows your name,” Gabrielle said. “Even as an intern, I felt I was part of the company and important to its success. They have always made me feel like I am capable and that I am here for a reason.”

As a DACA recipient, Gabrielle has also valued the support she received from DocuSign and Year Up. Paperwork backlogs in U.S. Citizenship and Immigration Services have delayed DACA renewals, sometimes past when a DACA authorization expires. When that scenario happened to Gabrielle, the lawyers at DocuSign and Year Up had her back, she said.

“My manager put me on leave and said, ‘Call me as soon as it’s ready and you’re back in,’” Gabrielle said. “This is something that happens and affects everyone, even a company that might lose an employee out of nowhere because a piece of paper didn’t come on time.”

Using the soft skills—networking, asking questions, seeking feedback—that she honed at Year Up, Gabrielle has made the most of her opportunities at DocuSign. She connected with the company’s Latinx employee resource group and, through people she met there, is starting a new position in customer support engineering. In that role, Gabrielle will be the first point of contact for external clients and vendors who use DocuSign. She’s excited for both what it means for her career and what she can share with her community.

“In my community of Brazilian immigrants, I don’t know a lot of people who have careers in tech,” Gabrielle said. “A lot of people don’t go further because of a lack of access to knowledge. It’s not that we don’t want to or because we don’t look for it, but we just don’t know where to find it. Now, I know a pathway to get somewhere. And sharing it with people, that’s the most rewarding.”

Gabrielle is just one of thousands of Year Up graduates ready to grow their professional career.