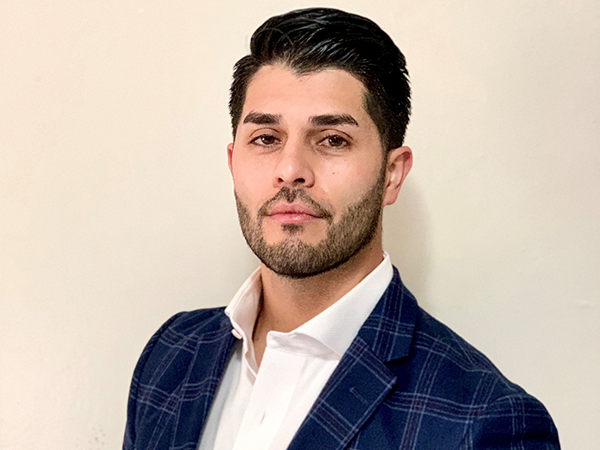 Christian, who works as an Associate Insights Analyst at LinkedIn, finds creative parallels between cooking and coding.

Christian Rubio’s creativity ranges from coding to cooking. The Year Up Bay Area graduate, who specialized in the Data Analytics training pathway and is now an Associate Insights Analyst at LinkedIn, finds a parallel to his day job when he unwinds by making Italian and Asian food from scratch—a pursuit he’s picked up during the pandemic. A hint of paprika here and a dash of oregano there can change the taste of a recipe, similar to how a small change in data and coding can change the function of a program.

“You write some things down you want to work out and that’s one route, but there could be 10 more routes you could take,” he said. “That’s a cool thing I enjoy about working in tech.”

With ingredients like curiosity, engagement, and organization—the three qualities he uses to describe himself—Christian has created a winning recipe for a career at the largest professional network in the world.

When I started the program, I realized I was a shy person, and I wasn’t a technical person either. We were working with SQL, Presto, Tableau, Python—very technical stuff. But I felt like I could thrive doing this. Year Up helped harness my curiosity.

Christian’s path to that opportunity began when a high school friend told Christian he was applying to Year Up. Christian was skeptical at first, but saw his friend find a job at Intuit after the program. Christian decided Year Up was worth a try to find a fulfilling career.

“I saw it as something that could be life-changing,” Christian said. “I thought, ‘Why not? What do I have to lose?’”

His penchant for engagement quickly revealed itself, as Christian chose Data Analytics because he saw it as the technical training curriculum that would challenge him most. That choice internalized a Year Up lesson that Christian lives daily: get comfortable with the uncomfortable.

“When I started the program, I realized I was a shy person, and I wasn’t a technical person either,” he said. “We were working with SQL, Presto, Tableau, Python—very technical stuff. But I felt like I could thrive doing this. Year Up helped harness my curiosity.”

In Year Up’s learning and development phase, Christian gained knowledge and skills in data management and analysis, visualization and reporting, software development, and programming. He also polished his professional skills, learning to ask for and apply feedback and leaning into the benefits of being organized.

“My mom raised me, and she was always on my case about being organized,” Christian said. “I didn’t see it go into effect until Year Up since there were so many moving pieces.”

During his six-month internship at LinkedIn, Christian’s willingness to learn took his core strengths to the next level. He asked for feedback from his internship supervisor and LinkedIn colleagues, clearly stated what his goals were for his career, and sought ways to contribute to LinkedIn’s success. His communication and commitment led to a contract position at the conclusion of his internship, which set the stage for his full-time role.

Now, as an Associate Insights Analyst, Christian pulls data and visualizations on various analytics projects and platforms, and he also works on data foundations with LinkedIn’s big data team. His approach of asking questions and doing research continues to serve him well as he takes on more projects and expands his role.

“Since I’m working with engineers and data scientists, you’ll see me in the back writing down notes. If we have time during the meeting, I’ll ask. If we don’t, I’ll ask my manager or a peer after the meeting. If they don’t know, I’ll Google it,” Christian said. “It gives me more energy and keeps me engaged in what I’m doing.”

These are practices that he preaches to the Year Up interns that he mentors at LinkedIn. This year, he is taking that mentorship role a step further as he directly supervises his own Year Up intern. As part of the company’s commitment to creating economic opportunity for every member of the workforce, LinkedIn first partnered with Year Up in 2011. Since then, the company has hosted more than 195 Year Up interns and hired more than 85 graduates. Today, LinkedIn requests more than 45 interns per year and leverages Year Up talent at locations across the country.

“I tell them to always be consistent about their follow-ups, to speak up, to introduce themselves and get out of their shells,” Christian said. “When I first started, I was timid. Everyone had gone to these Ivy League schools and I hadn’t been fortunate enough to go to school. I realized everyone is a normal person. The culture at LinkedIn is amazing, and I love to share my stories with the interns coming in. If I was able to do it when I thought I couldn’t, what’s the difference between you and me? Nothing. We’re just at different points of life. Keep trying really hard because you’re going to get there."

“We don’t just look to meet expectations. We try to go and exceed expectations,” Christian said of his fellow Year Up interns. “A lot of supervisors are starting to realize that we want to go above and beyond. I’m very proud of it.”

Christian is just one of the thousands of Year Up graduates ready to grow their professional careers.