Ty’Relle Stephens: From Year Up to the Providence School Board 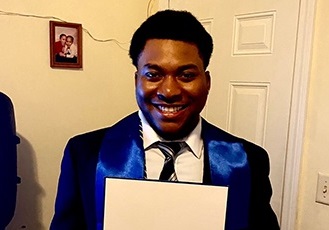 As the youngest ever member of the Providence School Board, Year Up graduate Ty’Relle Stephens is building a new Rhode Island.

20-year-old Year Up alumnus Ty’Relle Stephens is making waves in Providence, Rhode Island. The youngest individual ever elected to the Providence School Board—as well as a patient access associate at Kent Hospital—Ty’Relle’s leadership skills, networking abilities, hard work, and constant positivity are not only impressive, but inspiring. Today, he’s building a better future for Opportunity Youth across the Providence area.

What I want to accomplish is making sure that we set the youth up to be as successful as possible.

Ty'Relle Stephens
Member of the Providence School Board, Year Up Alumnus

In the beginning, Ty’Relle—as with so many other Year Up graduates—had to overcome many hurdles. “From kindergarten to fourth grade, they didn't have the right plan put in place for me to be able to succeed,” he explains. Describing middle school, he says, “I was suspended 10 times between sixth grade and seventh grade. It was just so ridiculous,” he says with a laugh. That changed in his teen years, when he decided to take charge of his future. He got involved with community activities, church, and academics. He ran for class president of Juanita Sanchez High School, and he won. This remarkable turnaround impressed everyone around him, but as Ty’Relle felt immense pressure to jump right into college, he was determined to find his own path. “A lot of people push college for kids going straight out of high school. But I’ve come to realize that a lot of people drop out. They owe lots of money, and sometimes don’t even pursue that career […] I have no problem with college, but people aren’t always ready […] Where I am today, I want to make sure we present this the right way to youth.”

That’s when he discovered Year Up.

Ty’Relle credits Year Up with giving him the direction he needed to hone his ambitions. “I began to build relationships,” he says. “I began to really, really grow within there.” He learned networking skills and discovered the leader inside himself. He carries these lessons into his career today, saying that Year Up “really helped me get the professional skills I needed.”

Year Up connected Ty’Relle to an internship opportunity at Kent Hospital, which would prove to be the launchpad for his future. Ty’Relle had more obstacles to overcome—with no car, getting to his internship meant using bus transportation and then walking 20 minutes through rain and snow—but his hard work paid off, and he thrived in the new position, thanks to his dedication, work ethic, and people skills. Even the onset of COVID-19 didn’t hold him back: his job commitment, particularly during the unpredictable changes that defined the beginning of the pandemic, deeply impressed the hospital’s president, who supported Ty’Relle in securing a full-time job.

Inspired by his success, and driven by a passion to help others, Ty’Relle set his sights on local politics. He got involved in the City of Providence, joining the African American Ambassador Group and becoming the Community Leader for the Youth Voices sub-group. Seeing his own potential, he then applied to be a member of the Providence School Board. While other candidates discussed the budget, Ty’Relle zoomed in on the importance of advocating for students, supporting them through traumas, and uncovering their potential. His inspiring message earned him the position, and in this role, Ty’Relle continues lifting while he climbs. “What I want to accomplish is making sure that we set the youth up to be as successful as possible.”

He’s not planning on halting his ascent anytime soon. While Ty’Relle’s current focus is on the school board, he hints at the long game: in the future, with more experience, he’s considering running for mayor.

Overall, he wants to foster a strong, supportive, and inclusive environment for other Opportunity Youth. Talking about his mother, he says, “She once told me that, ‘These young people, that are having certain struggles—let them know your story. Uplift them.’ And that’s what I want to do.”

Thanks in part to his Year Up experience, Ty’Relle is advocating for youth and enacting real change. To empower more young adults to lift while they climb,

To empower more young adults to lift while they climb, donate today.

It Takes a Village: Karina Tapia

A Community That Has Your Back: Marisa Desjarlais