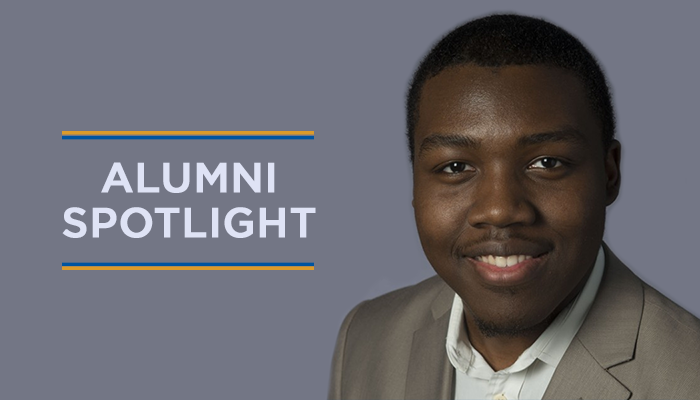 Embracing opportunity and education, Paul found his ‘sweet spot’ as a Digital Innovation and Systems Associate Specialist at Merck and communications student at Temple University.

When he was accepted to Penn State University in 2018, Paul Funches found himself facing the difficult reality that, due to financial reasons, he would not be able to attend. But when his brother told him about the Year Up program, Paul saw an opportunity.

“Things haven’t always gone according to my plan,” shared Paul. “When I said to myself two years ago that I’d be at Penn State pursuing a bachelor’s degree, I landed at Year Up. And now I believe that I’m better for it than I ever would have been.”

Today, Paul is busy. He is a Digital Innovation and Systems Associate Specialist at Merck—one of the largest biopharmaceutical companies in the world—while simultaneously pursuing a degree in communications at Temple University in Philadelphia.

When I got to Merck, there were things that I had learned at Year Up that I was able to apply in my role—things like time management, organizational skills, email, and Microsoft Outlook—and those actually played a huge part, not only in my internship role, but in my current role as well.

At Year Up, Paul specialized in Investment Operations, learning key technical skills in areas such as finance, data analysis, project management and operations, and business analysis. He also developed valuable professional skills, such as business communication, time management and organization, and networking.

“In business, there are a lot of things that you can specialize in, so you have to find your sweet spot in terms of what you want to learn and the jobs that you want to go after,” said Paul. “I found that project management and operations were my two biggest sweet spots, where you’re taking a look at and contributing to the bigger picture; those are the areas that I fell in love with.”

After the learning phase of the program, Paul earned a six-month internship at Merck as a Global Regulatory Affairs Intern, where he continued to build on these skills and quickly impressed his team with his drive and eagerness to learn.

“When I got to Merck, there were things that I had learned at Year Up that I was able to apply in my role—things like time management, organizational skills, email, and Microsoft Outlook—and those actually played a huge part, not only in my internship role, but in my current role as well.”

“Paul’s drive drew me to him right away,” said Laura Shelley, Merck’s Director of Global Regulatory Affairs and Paul’s manager. “He came to us as our first Year Up intern—the first cohort for Merck, period. We didn’t quite know what to expect. We didn’t think we were going to get someone who was so talented, who was going to be so driven to succeed and to pursue his education. He took seriously all of the networking opportunities, pushing himself forward. Paul totally embraced everything.”

As one of Merck’s first Year Up interns, Paul’s success has helped set the stage for future interns and a growing partnership. Since partnering with Year Up in 2019, Merck has hosted more than a dozen Year Up interns, and plans to more than double that number in 2021 alone. The relationship with Year Up is a strong testament to Merck’s efforts to foster a more diverse and inclusive workforce that drives a competitive advantage and reflects the communities they serve.

“There are 5 million inner-city and other African-American [young adults] who want access to the economy,” said Merck CEO, Ken Frazier, in an interview with CNBC. “They want to be participants...what they lack is the education. They lack the training, and there are opportunities—programs like Year Up. I think businesses have to use every instrument at their disposal to reduce these barriers that exist.”

“I know for sure that what put my life on a different trajectory was that someone intervened to give me an opportunity,” he continued. “We need to acknowledge that there are huge opportunity gaps that still exist in this country. Financial literacy is critical. Education is critical. That is the great equalizer.”

And as the partnership grows, Laura, a champion of the Year Up program at Merck, sees the value firsthand. “I hope I’m benefitting them as much as they’re benefitting me—there are things that I get out of the relationship as well,” she shares. “The diversity of thought—Year Up interns ask different questions, have different curiosities, share different thoughts. That’s what I look forward to, having that diversity of thought come to us.”

Following his internship, Paul began attending classes at Temple when Laura reached out to let him know about a summer internship opportunity at Merck, and encouraged him to apply. That summer, after a competitive interview process, Paul rejoined Laura and the team as a Regulatory Planning and Execution Intern, where he owned a project creating a metrics dashboard that would be used by Merck leadership, and proved how he could shine.

“When his internship ended, we saw there was a need, and we had the ability to bring him on as a Digital Systems and Innovation Associate Specialist,” said Laura. “This young man has the skillset we are looking for, and he expressed interest in working a full-time job while going to school, so we started having conversations internally about how we could make it work, and we found a way.”

“Being at Merck, my leadership team and my direct manager are very supportive, and so I’m able to flexibly balance school and work—I think it all comes together pretty nicely,” Paul adds.

With the unwavering support of Laura and the team behind him, Paul plans to continue to progress his career at Merck as he completes his bachelor’s degree at Temple, with hopes of one day earning his MBA and building a successful career in project management.

“Perseverance and persistence are important because you never really know where you’ll end up,” he said. “But you won’t end up anywhere if you don’t keep going, and don’t keep working toward your goals.”

Paul is just one of thousands of Year Up graduates ready to grow their professional career.

From her experience in Year Up, Bene’t Morando learned that humility is the key to confidence and to seize every learning opportunity she’s presented with.
See more