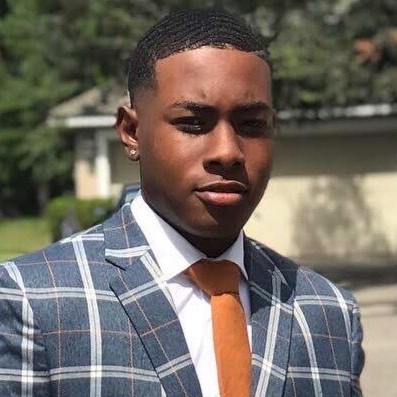 Leadership isn’t about superiority or power; it’s about forging connections, building trust, and persisting when times get tough. For Malcolm Smith, a Year Up graduate and recipient of the Chris Mellow Award for Leadership, the best leader is the one who recognizes that everyone has the potential to be a leader – they just need the opportunity.

At the beginning of his Year Up program, Malcolm and his Year Up Jacksonville peers participated in an exercise where they were each asked to write down a negative word that other people had used to describe them throughout their lives. “Lazy.” “Unmotivated.” “Low-life.” For Malcolm and his classmates, these were words they were used to hearing, words that made them feel like they were stuck in place and limited in their ability to achieve success. They were words that, without the right encouragement and support, could have made them abandon their Year Up journey before it had even begun.

For Malcolm, proving these words didn’t define him was an uphill battle. Seven weeks into the program, Malcolm took a career readiness assessment to evaluate his progress and his ability to enter the workforce and was discouraged by the results. However, his Year Up coaches reminded him that he could persist in the program and dedicate himself to learning the skills needed to be successful in the business world; he just needed to believe in himself. As one of his coaches told him, he could and would “figure it out.” So, he did.

Malcolm worked alongside his Year Up coaches and mentors to improve his career readiness, and his hard work paid off. After completing Year Up training, he became a Client Operations Analyst intern for Bank of America. And, at the end of his internship, he was offered a full-time position as a Project Analyst. Now, Malcolm believes that “self-sufficiency is the key to success,” especially when faced with new challenges. And those negative words? They’re just that – words.

In his graduation speech, Malcolm reminded his classmates that by completing the Year Up program, “we are the exact opposite of those words.” Although the Year Up Jacksonville class began their program as strangers, they bonded together by first realizing, and then defying, the negative expectations that had been established for them throughout their lives.

For many, society’s negative expectations present a roadblock to achieving their full potential. As someone who has faced these challenges throughout his life, Malcolm reminds current students, alumni, and prospective applicants that, “without struggle, there is no growth, and without growth, there is no success.”

It‘s not the negative words that define us, but what we choose to do with them. For Malcolm, those words were the motivation he needed to step out of his comfort zone and step forward as a leader.

Donate today to support Year Up in helping young adults like Malcolm continue to defy expectations and reach their potential.