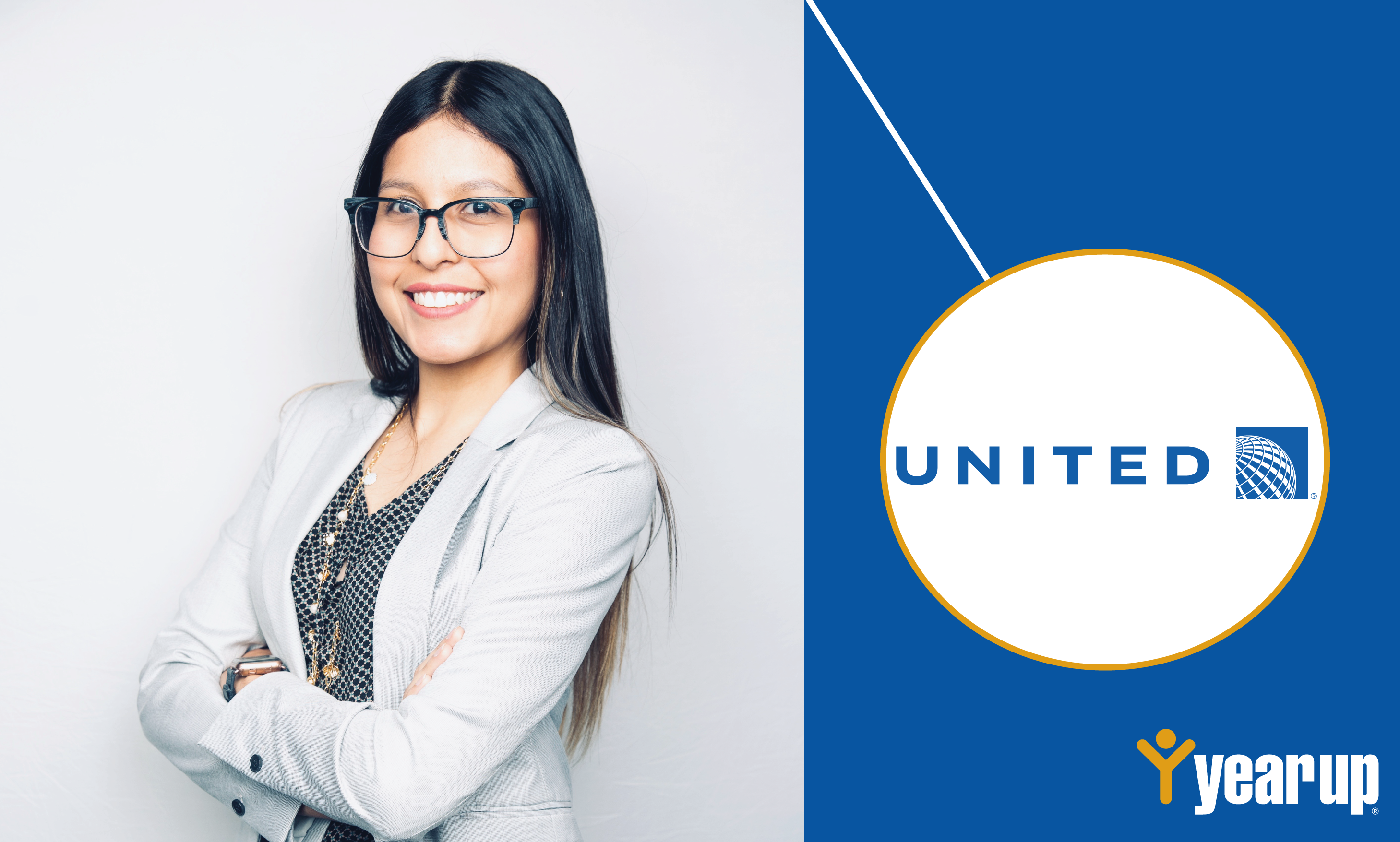 The Year Up graduate came from Venezuela with just one bag and now works on United Airlines’ revenue management team.

Air travel is full of connections. When Emily Lopez arrived at Chicago’s O’Hare Airport in 2016, carrying just one bag from her life in Venezuela, little did she know that she was walking through the hub of her future employer. But it wasn’t what happened inside O’Hare that set her on that path — it was the connections she made outside of the airport that led to a fulfilling career at United Airlines.

Since interning with United as part of the Year Up Chicago program, Emily’s journey has been filled with growth and development, progressing from associate analyst to manager on the revenue management team, thanks to her reputation as a quick learner and hard worker as well as consistent encouragement from her managers. As a Year Up alumna, she now shares her experience with members of the Venezuelan community in Chicago and encourages them to dive into their potential.

“The opportunities I’ve gotten over the last four years, it’s real,” Emily said. “People might think it’s too good to be true, but I am proof that it’s real.”

Emily’s journey toward Year Up started with one of her first connections in the U.S.: a family she nannied for in Chicago spoke Spanish, which made communication easier for Emily, and both parents, Damarys and Joe Cover, worked at United. They eventually brought her to a Year Up event, and Emily applied to the program that same night.

Those [Year Up] classes, especially the public speaking class, created a baseline for me to keep growing and step out of my comfort zone.

During Year Up’s learning and development phase, Emily realized just how much support the program offered. Spanish was her first language, and Year Up presented her first chance to have a conversation entirely in English.

“I was so shy and didn’t talk to anyone, unless they spoke Spanish,” Emily said. “Those classes, especially the public speaking class, created a baseline for me to keep growing and step out of my comfort zone.”

With dedicated practice, her husband’s listening ear, and many sessions in front of the mirror, Emily overcame her fears and spoke at her Year Up graduation. That confidence set the stage for her internship at United, where she quickly became an integrated member of the team. United also matched her with a mentor, Allison Kreutzjans, which is part of a regular support system throughout the company. Emily trained with new hires, had regular one-on-one meetings with her manager, Elizabeth Lewandowski, and listened to feedback from her mentor, which all played key roles in her internship success.

I’ve loved the support and how open-minded people are at United. It’s a great starting point for any career if you want to grow and learn.

“Everyone works differently, so my manager encouraged me to go around and see how people do their jobs. She wanted me to figure out what worked best for me,” Emily said. “I brought a notebook and pen and took notes in every meeting, asking questions as much as I could. Now, I always suggest that to people. Don’t be afraid to ask questions. Even today, I have questions. We don’t need to know everything.”

By the end of her internship, Emily had an offer letter in hand for a full-time position. In the four years she’s worked for United, she’s advanced her career in four different roles. Emily has felt welcome at United since day one and cites the numerous opportunities for growth, the encouragement from her managers, and the chance to act as a mentor herself as reasons why she loves working there.

“My current manager, Kerry Dolan, has encouraged me to apply to positions with more responsibility, which makes me think I’m doing the right things,” Emily said. “I’ve loved the support and how open-minded people are at United. It’s a great starting point for any career if you want to grow and learn.”

As her career progresses, Emily is on the verge of a change in her personal life, as she and her husband bought a house and are expecting a baby girl in the spring. As she takes on motherhood, Emily looks forward to continuing to grow at United and telling her story to others in search of a career.

“Everything happens for a reason,” Emily said. “I would tell myself, always do the good thing. If you act in a good way, good things will come to you regardless. I went through hard times, but I saw the light.”

Interested in exploring a career at United? Check out open roles and apply here.

Learn more about partnering with Year Up.