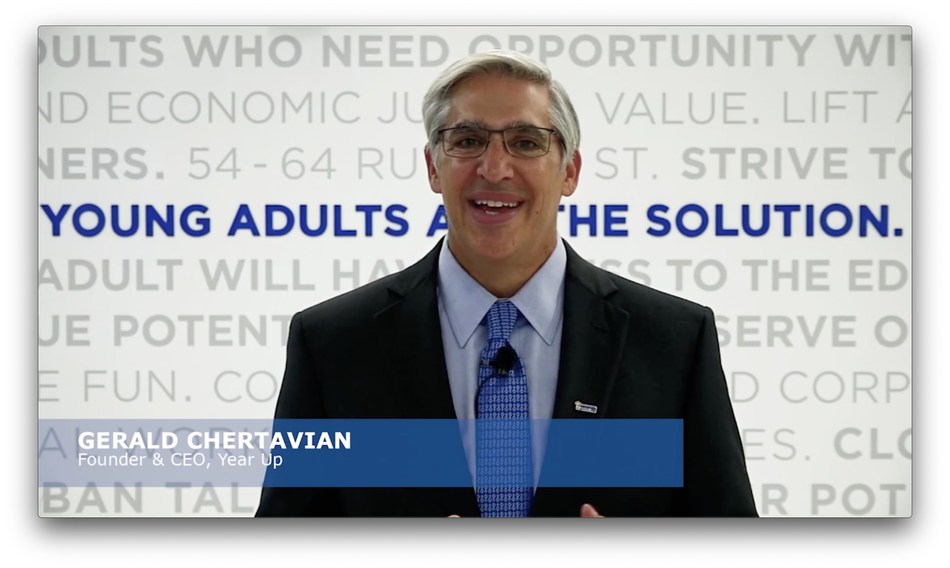 "2020 has been a challenging year. But you stuck with us and fought alongside us to not only sustain but to advance our mission," said Year Up Founder and CEO Gerald Chertavian while addressing the Year Up community. "We will continue to scale and evolve our program to serve more deserving young adults, and build the capacity to work with and through others, dramatically increasing the number of young adults who gain access to opportunity."

More than 1,000 attendees joined the event on September 16th, where Year Up alumnus and PhD student Durrell Washington interviewed Bryan Stevenson, Founder and Executive Director of the Equal Justice Initiative (EJI). They focused on the need to "commit to learning history" to recognize and address failures contributing to the racial wealth gap, and how young adults could accelerate social change.

Jalen Epps, who graduated from Year Up Greater Boston in 2015 and is an Associate Program Manager on the Emerging Talent Program Team at JPMorgan Chase, spoke about how Year Up still inspires him.

"I currently serve as the co-chair for the Year Up Boston Alumni Association, and through my work on the Emerging Talent Programs team, I ensure there are opportunities at the firm for diverse candidates of all backgrounds," said Epps.

Jameela Roland, a Year Up Puget Sound 2017 graduate working at Microsoft, emceed the event. Roland testified before Congress in 2017 as part of a hearing on "Opportunities for Youth and Young Adults to Break the Cycle of Poverty." Beija Gonzalez, a 2018 Year Up Bay Area graduate working at LinkedIn, spoke about how Year Up empowered her to be a more effective community leader.