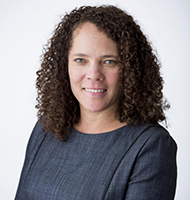 McClain previously served as Chief Financial Officer at Year Up; will focus on scaling Year Up's reach across the United States

The nonprofit Year Up announced that it has appointed Ellen McClain as its Chief Operating Officer (COO) to lead and manage the organization's growth as it works to advance economic and racial justice across the United States through its proven approach to workforce development. McClain previously served as Year Up's Chief Financial Officer (CFO).

"With millions of young people currently out of school and out of work due to the pandemic, Ellen's leadership will be critical in setting the course for more inclusive talent practices across corporate America through thoughtful, proactive conversation that can drive change," said Gerald Chertavian, Year Up Founder and CEO. "Ellen's commitment to fostering diversity, equity and inclusion has been integral in putting us on the path to becoming an antiracist organization, and will continue to bolster our ability to support our students and staff and ensure Year Up's long-term success."

"It's an honor to assume more responsibility in service of Year Up's mission to close the Opportunity Divide by connecting Black, Indigenous, Latinx, Asian, Pacific Islander and other young adults to meaningful careers with the support of corporate and philanthropic partners," said McClain. "For over twenty years, Year Up has been propelled by the unwavering belief that talented, motivated young adults reside in all communities, but the path to economic opportunity must be actively built where existing systems and structures have not succeeded in helping so many young adults access family-sustaining jobs. I am beyond inspired to help nurture a thriving multi-racial, multi-ethnic, racially literate Year Up community in which all colleagues experience a true sense of belonging."

John Bradley, who served as Year Up's COO since 2015, will now serve as a Special Advisor to the CEO and will lead Year Up's policy and advocacy work.

Nationwide, 80 percent of Year Up graduates are employed or attending college within four months of completing the program, with average starting salaries of $44,000/year. In May 2021, the federally-sponsored Pathways for Advancing Careers and Education (PACE) follow-up evaluation of Year Up showed that in the four years post-program, young adults randomly assigned to Year Up earned 30-40 percent more compared with similar young adults in a control group — the largest impact on earnings reported to date for a workforce program tested in a randomized controlled trial.

Prior to joining Year Up as CFO in 2015, McClain served as President, EVP and COO of the New York Racing Association. She currently serves on the Board of Crane Co., a diversified manufacturing company (NYSE:CR). McClain earned a B.A. in Economics from Brown University in 1986 and a Master's degree in Business Administration from Harvard University in 1993.