Menu
HomeNewsTech Jobs Lead to the Middle Class. Just Not for the Masses.

Tech Jobs Lead to the Middle Class. Just Not for the Masses.

Brittney Ball was living in a homeless shelter with her baby when she learned of a one-year program offering technical training, professional skills and an internship. She took the plunge.

Five years later, Ms. Ball is a software engineer in Charlotte, N.C., earning more than $50,000 a year. A 30-year-old single mother, she has health insurance, retirement savings and plans to vacation in Mexico this year.

“It showed me that I could do something different,” she said about the training program. “It really lit a fire under me.”

Preparing people for tech jobs is hailed as the great employment hope of the future. Cities and states across the country are rushing to teach elementary and high school students to write software. “Learn to code” is a career-advice mantra.

Mastering code and applying it in business, some experts say, holds the promise of becoming the modern path to the middle class for people without four-year college degrees. And nonprofit programs like those used by Ms. Ball are considered central to getting people there.

“Tech jobs can be seen as the new manufacturing jobs,” said Byron Auguste, chief executive of Opportunity@Work, a nonprofit group that focuses on work-force issues. 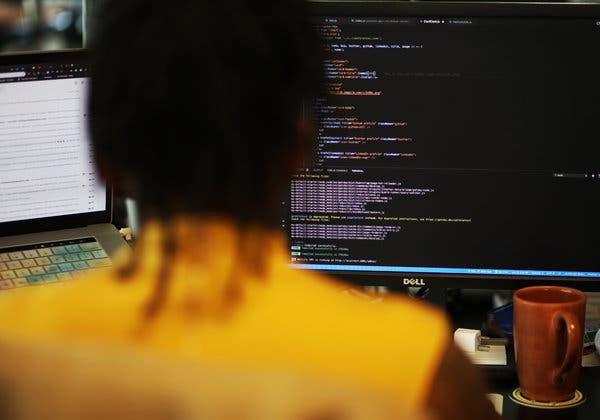 More than 70 percent of Year Up graduates land jobs within four months, with starting salaries of $34,000 to $50,000. Travis Dove for The New York Times

There are bright spots, but those programs remain mostly small scale so far, and expanding quickly has many complications. Training, mentoring and counseling people — often from disadvantaged backgrounds — is not a mass-production process.

“The idea that tech jobs are going to create a substantial middle class anytime in the foreseeable future is unrealistic,” said Hal Salzman, a professor at the John J. Heldrich Center for Workforce Development at Rutgers University.

Calculations by Professor Salzman and Khudodod Khudododov, a graduate student, show 70 percent growth in information technology jobs over 15 years, to 4.7 million in 2018. But that total is far fewer than half the 12.8 million in manufacturing, a sector that shed 1.5 million jobs over that span. About one-fourth of the tech jobs are held by workers without four-year degrees, the researchers estimated.

A growing number of nonprofit organizations focus on pathways to tech-related jobs. Some work in single communities, while others have national reach, like TechHire, Skillful, Per Scholas and Year Up, the program that Ms. Ball went through.

The ventures, supported by foundations, corporations and state and local governments, are trying to tap into a broad shift in the labor market. Most tech jobs are no longer in the technology industry, an increasing trend that experts say promises to create good jobs in fields like marketing, health care and finance.

But the tech-centered initiatives have a long way to go before they touch a swath of the labor market anywhere close to the size of manufacturing.

Year Up, one of oldest, largest and fastest-growing in the group, illustrates the evolution, potential and limits of the model. A nonprofit organization founded in Boston in 2000, it started with computer help-desk support and repairs. But it has continuously adapted to shifts in technology, updating and adding courses that include quality assurance testing, network administration, web development, software engineering, cybersecurity and data analytics. It also offers ones in specific industries like fraud detection in finance. 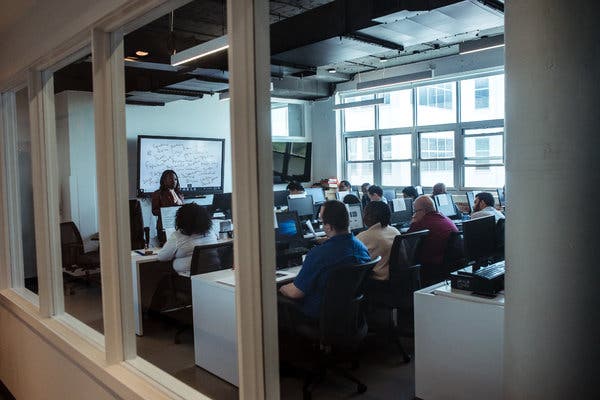 A coding class in Brooklyn with Per Scholas, a nonprofit training organization. It and similar ventures are trying to tap into a broad shift in the labor market. Ryan Christopher Jones for The New York Times

Year Up has 15,500 alumni, and 4,700 people in its program this year. It is intended for low-income people, mostly from 18 to their mid-20s. Those selected receive six months of occupational and general skills training, followed by a six-month internship at an employer, and they are paid modest monthly stipends.

More than 70 percent of Year Up graduates land jobs within four months, with starting salaries of $34,000 to $50,000, depending on the job and local market.

“In one year, you will not be living near the poverty line,” said Gerald Chertavian, founder and chief executive of Year Up, describing its pitch to applicants.

Like many of the nonprofit training programs, Year Up has a rigorous selection process. That raises the question of whether the programs are mainly choosing highly motivated people who are destined for success regardless of their current circumstances — more of a select group than a representative one.

Year Up looks primarily for motivation, not technical skills, in a screening that includes interviews and an essay about the person’s background and goals. About 20 percent of the initial applicants are accepted, a rate that rises to about half for those who complete the interviews, Mr. Chertavian said.

“But it is a self-selecting group,” he said. “We’re asking these young people to go on a challenging journey in a high-support, high-expectations environment. It’s not for everybody.”

A federally funded evaluation of Year Up, published last year, accounted for selectivity by using a so-called randomized controlled trial. It tracked more than 1,600 Year Up students in 2013 and 2014 and 875 similar young people, who met the standards for admission but did not go through the program. 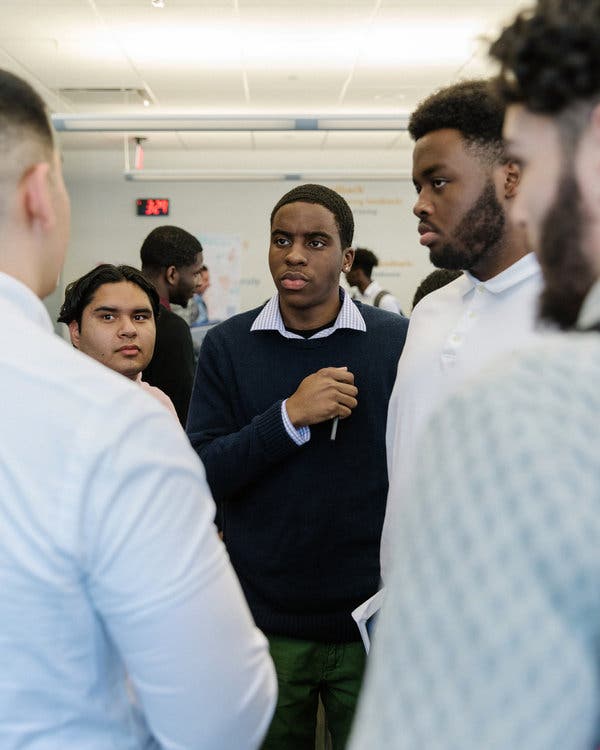 Year Up students meeting in Boston with alumni of the program. The organization has 15,500 alumni, with 4,700 people in its program this year. Cody O’Loughlin for The New York Times

The earnings of Year Up students were 53 percent more than the control group’s a year after graduation and remained far higher for the following year, the study found.

Year Up “embodies strong forms of what we know makes sense and seems to work,” said David Fein, principal investigator for Pathways for Advancing Careers and Education, a multiyear evaluation of training and education programs. “The impact is real for those who are chosen.”

When Will L. Davis of Snellville, Ga., learned of Year Up, he had a retail job paying just above the minimum wage. He was looking for more. “This is my chance,” he recalled saying to himself.

After the Year Up coursework, he landed an internship at the local office of New York Life, where he was hired full time in late 2017. Today, Mr. Davis, 27, is a cybersecurity specialist working on an incident response team at the company. He earns above $40,000, more than twice his salary in retail.

Partnerships with community colleges, begun as an experiment in 2012, have become the driver of growth for Year Up. About 3,000 of its 4,700 students are in programs conducted with community colleges. Year Up and the colleges share space, people, training courses and best practices. By combining resources, the program can reduce its cost of $28,000 a student by 30 percent, Mr. Chertavian said.

The model at Year Up and the other nonprofit work-force ventures hinges on close ties with employers. Their programs involve work-based learning at companies to link training with employer needs, and thus hiring. They typically teach both technical and “soft skills” like teamwork, confidence while speaking in public and household budgeting — a comprehensive formula that requires more time and money.

It also requires a change in corporate hiring. Four-year college degrees remain a requirement at many companies. In the last few years, some have dropped that hurdle for certain occupations, responding to a tight job market, calls for diversity and the success of programs like Year Up. 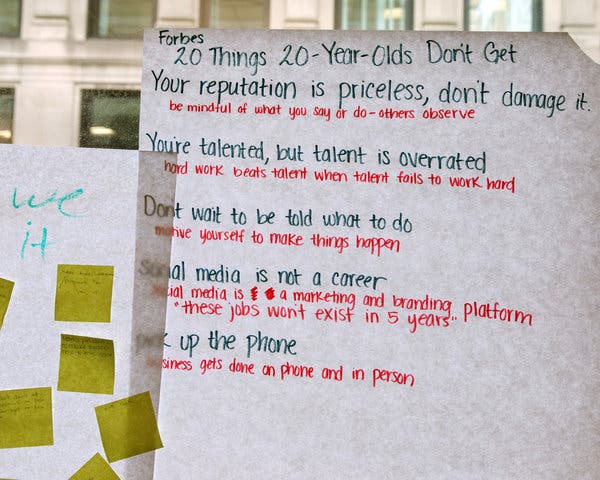 Motivational signs and quotes line the walls of Year Up in Boston. The group typically teaches both technical skills and “soft skills,” like teamwork. Cody O’Loughlin for The New York Times

Accenture, a large consulting firm, has eliminated the degree requirement for a handful of job categories, mostly tech jobs. To train nondegree recruits, the company created an apprenticeship program.

Year Up is a leading supplier to the Accenture apprenticeship program, and Kayla Usmani is one of the Year Up students Accenture hired. Before Year Up, she had no experience with technology, other than entering information into electronic forms in a low-wage job at a hospital.

“I was starting from zero,” she recalled. “I really didn’t know if I could do it.”

Mastering technology was one challenge. But, Ms. Usmani said, so was building the confidence to make presentations, speak up and ask questions, and begin to feel comfortable in a tech-work culture.

Ms. Usmani, 25, persevered and thrived. In August, Accenture hired her as a software engineer associate. She is now working on a data-collection and analysis project at an insurer in Atlanta, and her goal is to become a data scientist.

She is also taking courses toward a bachelor’s degree in information technology. Ms. Usmani, one of 11 children, would be the first in her family to earn a college degree.

“I wouldn’t be where I am now without Year Up,” she said.

Yet replicating success stories like hers in truly large numbers remains the big challenge. Mr. Fein, the lead investigator for the government study, said Year Up had delivered impressive results.

“But the question now,” he said, “is whether they can scale it up.”