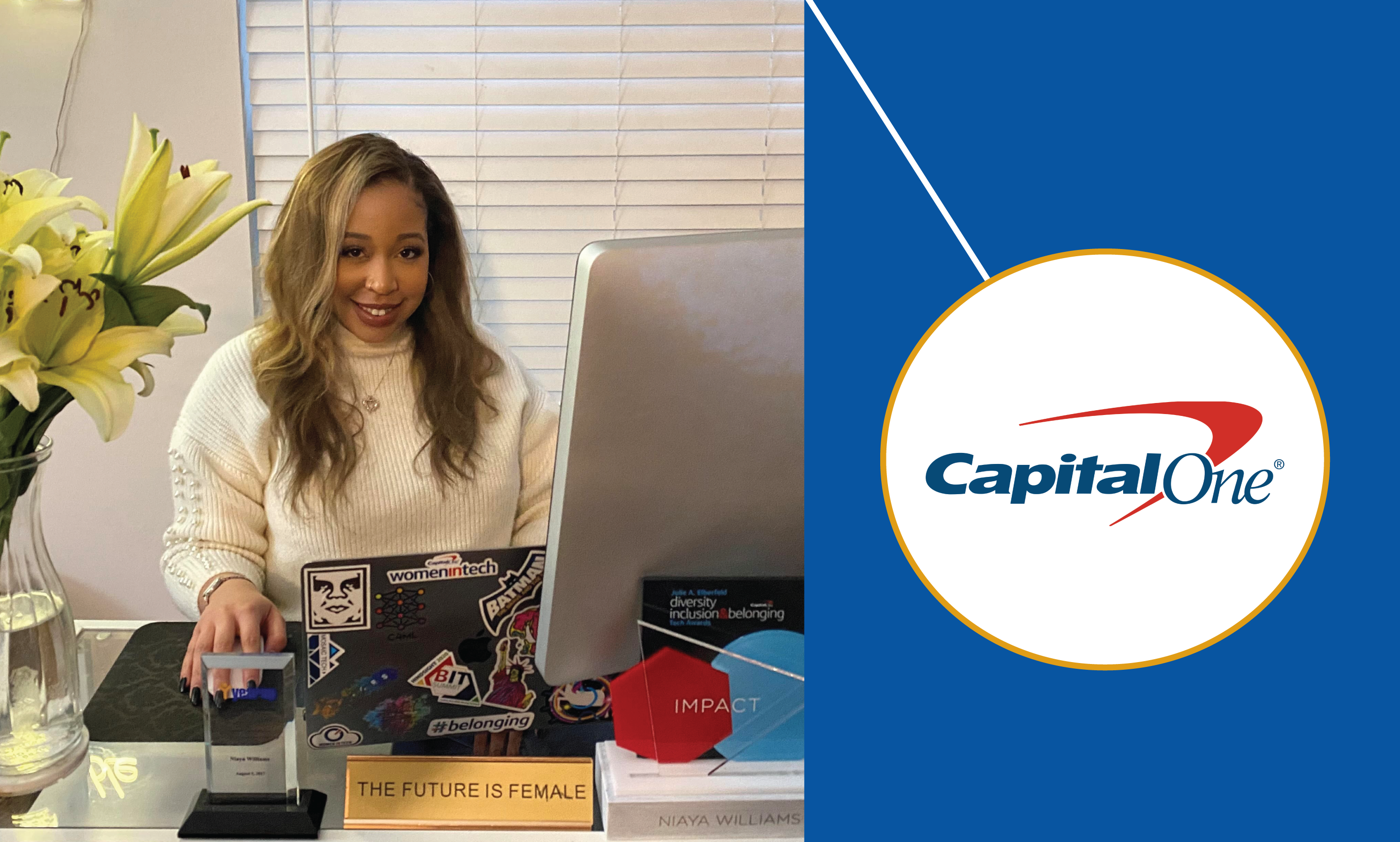 The Year Up National Capital Region graduate, having felt empowered to break into the tech field, now works in process management at Capital One.

Niaya Williams always believed that she wasn’t skilled at math. The subject wasn’t her strong suit in high school, and she didn’t see many other Black women in engineering or STEM careers. With the conversations that she internalized about people like her in the space, it became easy for her to have “not good at math” as part of her identity.

Fast forward through her time at Year Up National Capital Region and an internship at Capital One, and Niaya flipped how she views her abilities in math and beyond. She specialized in software development and support at Year Up and now works full time as a Principal Process Manager on Capital One’s staffing team. In that role, Niaya works on talent management and partners with managers on the referral process.

“Now, I’ve done the work, and I know I deserve to be here. I’m ready for whatever comes next.”

“When I saw the types of math it took to become an engineer, and with Year Up bridging the gap between the education you get and the job you’ll perform, I thought, ‘Why did I think I couldn’t do this?” Niaya said. “I got a birds-eye view early on how it translates into your real-world skills.”

College hadn’t offered that same perspective to Niaya, who left her four-year university due to the burden of paying for school. She was exploring community college options and working in cosmetology when one of her younger clients arrived, dressed in a full suit. Niaya asked her where she worked; the client handed her a piece of paper with Year Up written on it.

Niaya wavered on whether the program was the right fit. When she applied and got the call that she had been accepted, she even said no. But her gut feeling — and guidance from her mom and best friend — told her to call back.

“I said, ‘I think I need to trust the process,’” Niaya said. “From that moment on, I decided I’m going to do the work. I need a platform to get me where I need to go. If I don’t do this, I’ll go back to what I was doing before.”

With that commitment, Niaya dove into coding and project management in Year Up’s learning and development phase. Beyond the technical skills, the mindset that Year Up taught her — that she belonged in the space, that she was empowered to take on any challenge — was the biggest benefit.

“The conversation about access is really important,” Niaya said. “I’m a Black woman in tech. There is a huge barrier to break into the field because of what people think is possible. I didn’t think I was good at math — I wonder what other messages Black and Brown people hear about their capabilities in this space, which we don’t exist in.

“I’m glad that my time at Year Up ended up being technical because it stretched me in a way that I didn’t think was possible,” Niaya continued. “Year Up showed me that I can do anything. To see other Black people defying the odds, to have that mind shift — that was everything I needed.”

Niaya brought that confidence to her Capital One internship, where she served as the first intern on the company’s chief of staff team. Her grit and determination, along with encouragement and reassurance from her Year Up coaches, landed her a full-time role when she graduated from the program in 2017. She’s worked at Capital One since, serving in various chief of staff team roles and as chair of the company’s Year Up alumni committee.

Growing in her career at Capital One has also revealed to Niaya that her goals are no longer about checking boxes. Her focus these days: being a resource, being present and connecting with as many people as possible.

“I want to do better. I want more from myself. I want to strive,” Niaya said. “When I dropped out of school, there was a seismic shift in everything for me. I made goals then because I thought it would make me feel like I deserve to be here. Year Up helped me understand that it’s about doing the work every day.”

“Now, I’ve done the work, and I know I deserve to be here. I’m ready for whatever comes next.”

Support Year Up innovations that empower more young adults to jumpstart their careers, support their families, and give back to their communities.

Sabrina Flores: Rising to the Top at PayPal

The Year Up Bay Area graduate has made her mark at PayPal and earned the praise of company executives, including CEO Dan Schulman.
See more