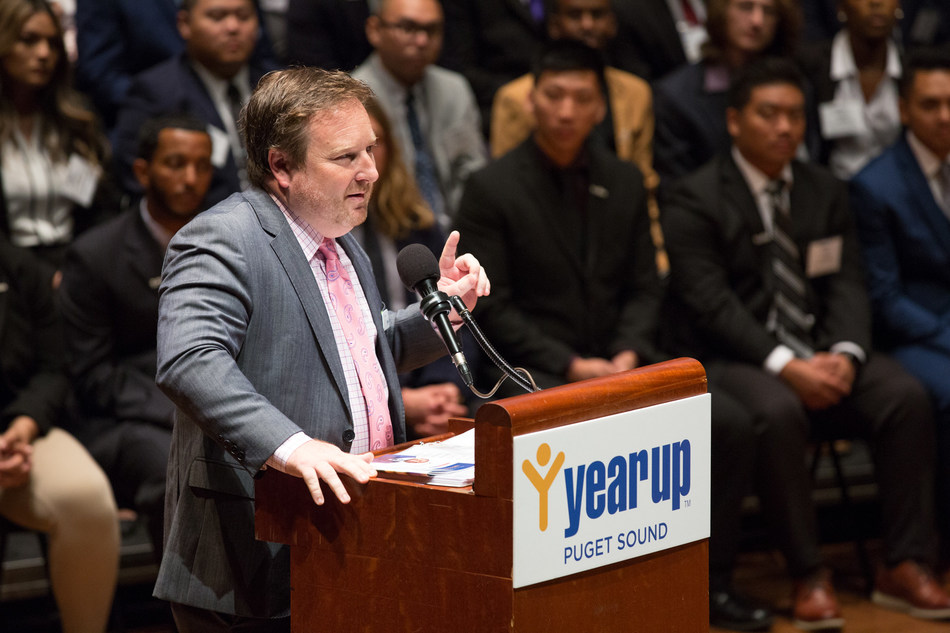 Continuing to expand its proven approach to job training for young adults, the nonprofit Year Up announced today that it will be partnering with NBCUniversal as part of Comcast's $100 million multiyear, comprehensive commitment to advance social justice and ensure more people have equal access to the education and training needed to succeed.

Fred Krug, serving as Managing Director for Telecommunications, Media, and Entertainment at Year Up, will lead Year Up’s efforts in this sector and focus on improving diversity, equity and inclusion.

"As one of the world's largest media and entertainment companies, NBCUniversal has a responsibility to give back to our communities and help level the playing field so that underrepresented groups are afforded the access and skills needed to break into this industry and have opportunity for success," said Hilary Smith, EVP of NBCUniversal Corporate Communications and Social Impact. "We are excited to partner with Year Up, which shares our commitment to promoting equity in the arts and media, as well as our goal to effect real, sustainable change."

Fred Krug, the new Managing Director for Telecommunications, Media, and Entertainment at Year Up, will lead Year Up's efforts in this sector and focus on improving diversity, equity and inclusion.

"As the entertainment industry looks to increase opportunities for Black and Latinx Americans, Year Up will serve as a proven partner in helping companies recruit and retain talent from an often overlooked demographic — individuals without college degrees," said Krug. "By requiring a bachelor's degree, companies automatically exclude more than 70% of Black Americans and nearly 80% of Latinx Americans from consideration. Year Up will provide strategic guidance to determine the effects of four-year degree requirements on entertainment companies' talent practices and help them move towards skills-based hiring instead."

Prior to his role as Managing Director at Year Up, Krug served as the Executive Director of Year Up Puget Sound, where he built partnerships with more than 50 leading companies including Microsoft, Amazon, Expedia, Zillow, REI, Nordstrom, Expeditors, Seattle Children's Hospital, and F5.  Krug has held leadership roles at the Workforce Development Council of Seattle-King County, New Avenues for Youth, and Youth Employment Institute.

"Fred's experience working at the intersection of business and community for the past 25 years gives him tremendous insight into how companies can re-think their talent practices to source talent from local organizations like community colleges and nonprofit programs," said Gerald Chertavian, Year Up Founder and CEO. "We're thrilled to have Fred focus on the entertainment industry as we continue working to close the Opportunity Divide for millions of young people across the country."

Year Up provides young adults with in-demand technical and professional skills training, followed by an internship at a leading employer. Year Up's subsidiary, Grads of Life, also consults with companies on how to drive more inclusive talent practices, and provided critical input around the launch of OneTen — a coalition of leading companies, including Comcast, committed to upskilling, hiring and promoting one million Black Americans over the next 10 years into family-sustaining jobs with opportunities for advancement.

Nationwide, 90 percent of Year Up graduates are employed or attending college within four months of completing the program, with average starting salaries of $42,000/year. In 2018, the federally-sponsored Pathways for Advancing Careers and Education (PACE) evaluation of Year Up showed a 53% increase in initial earnings for young adults randomly assigned to Year Up compared with similar young adults in a control group—the largest impact on earnings reported to date for a workforce program tested in a randomized controlled trial.